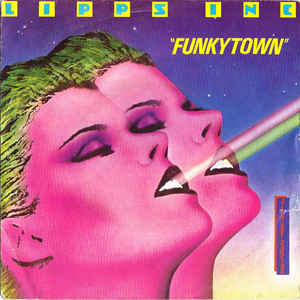 The Innocent Vicars cover is good.

The Eldissa cover is better.

The Innocent Vicars were a short-lived punk band that had two singles in 1980: “Funkytown” and an original song, “Antimatter.” The band’s Richard Norris went on to become a producer and musician in other bands such as The Grid (fairly popular in the UK, but never really crossed the pond to the US). The bongos set the upbeat tempo of this cover. The vocals come in, much deeper than the original, with lyrics sometimes barely discernible. The middle briefly pays homage to the iconic electronic beat before launching into a guitar and drum groove session. Although the electronic style barely makes an appearance, creative percussion remains.

Eldissa is more of a recording project than an official band. The goal was to redo major disco hits in a Bossa Nova style. No synth riffs here; just “Girl From Ipanema” meets a little bit of Santana’s “Maria Maria.” Eldissa’s “Funkytown” is less frenetic than the original, doling out the lyrics at a measured and tranquil pace. Where the instruments steal the spotlight in the original, the smooth vocals remain at the forefront of this cover. Go ahead, cha-cha leisurely towards Funkytown. If you enjoy this cover, I would also recommend Eldissa’s version of Anita Ward’s “Ring My Bell” or their version of the Bee Gees’ “Stayin’ Alive.”

Pseudo Echo is an Australian band formed in the early ’80s. They are still performing, although they have had some overturn in their membership. It’s not just me who thinks this cover is best. Pseudo Echo’s version of this song reached number 1 in Australia, number 1 in Canada and New Zealand, number 6 in the US, and number 8 in the UK. The beginning of the cover just sounds like a cool rock jam. Then the synth kicks in with the iconic “Funkytown” hook. The band really doubles down, gives the song their all, and embraces its quirkiness. The New York Yankees t-shirt is a nice touch; the original song’s writer, Steven Greenberg, wrote the song about wanting to move from Minnesota to New York.  Yes, NYC is “Funkytown.” Of course you expect a guitar solo, but this cover gets the added bonus of a keytar. By the end of the song you realize that you definitely did need a rock version of “Funkytown” in your life.