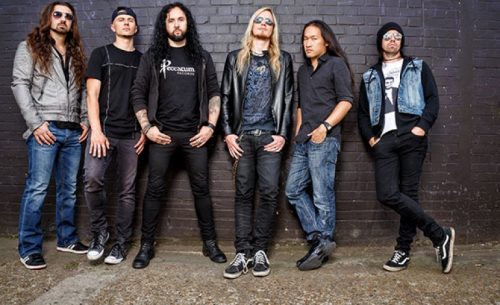 Celine Dion’s Oscar-winning ballad from Titanic has been reinterpreted by headbangers near and far – pretty much wherever there are long-haired dudes with guitars. A quick Google search on “Heavy Metal Covers My Heart Will Go On” yields many results. The latest to give the track the metal treatment is DragonForce, who included it as the closing track on the new album Extreme Power Metal.

DragonForce has kept the metal-flame burning for two decades by fusing melodic, Iron Maiden-esque speed metal with fantasy and video-game inspired lyrics. The band has recorded the occasional cover, too, including Johnny Cash’s “Ring of Fire” and the Japanese band Ziggy’s “Gloria.” They introduced this latest at TwitchCon (an event for the live-streaming gaming platform Twitch.tv) telling the audience, “Right now we’re going to play you something completely different. Are you guys familiar with the movie Titanic? That’s right, we’re going to do you some Celine Dion right now.” Lead vocalist Marc Hudson then kicked in with a massive yowl.

A keyboard intro that plays like a lost soundtrack to an Atari game opens their cover, before it transforms into a full-on prog metal assault. The onslaught features machine-gun style drumming, symphonic keyboards, finger-bleeding guitar solos and operatic-metal vocals from Hudson. Even though they were performing a song from the ‘90s, watching them you would think the ‘80s never ended. Watch it below.