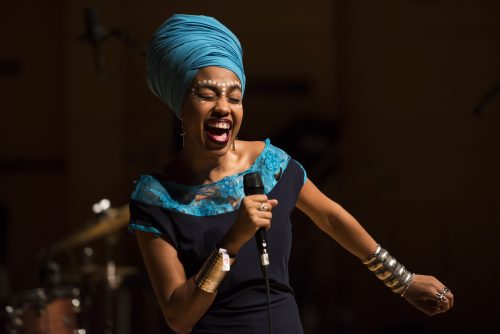 Erykah Badu is considered to be one of the pioneers of the ‘90s musical genre known as neo soul. Her music fused elements of different eras of soul, hip hop and jazz. Her 1997 debut album Baduizm was considered groundbreaking. These days, because of streaming, we take it for granted when an artist blends together musical styles from across different eras. Back then, displaying such a cross-section of musical influences required not only a tremendous talent but access to a deep music collection.

Badu continued this sonic exploration on her 2000 album Mama’s Gun, especially on the ten-minute song suite “Green Eyes.” The track’s opening section is mixed like an old jazz record, complete with the background pops and hisses that one normally would hear on a worn-out LP. In the first part, Badu imitates Billie Holiday, eeking out the high notes just like Lady Day would. For the second section, it shifts into a jazz ballad with Badu singing out, “I’m insecure/But I can’t help it.” In the final minutes, she shifts squarely into ‘70s R&B territory, but with a ‘90s drum groove, courtesy of Questlove.

Jazzmeia Horn, an up-and-coming jazz artist, covered the “Insecure” section of “Green Eyes” on her sophomore album Love and Liberation. Despite her name, Horn did not grow up listening to jazz. She was introduced to the music by a teacher who gave her a CD of jazz artists. “It was basically like a dictionary of sound of different singers, and that’s what really inspired me to sing jazz,” she told NPR.

Horn’s 2017 debut album A Social Call earned a Grammy nomination for Best Jazz Vocal album. In early 2018, at the award show’s pre-show ceremony, she sang a scorching cover of the jazz standard “Moanin’.” With that performance, she showcased her unique ability to scat as if she was playing a saxaphone. It’s a technique she carried over to the Badu cover.

At first listen, it is not immediately obvious that Horn is covering Badu as she does not even include the words “Green Eyes.” The track opens with a slow piano intro. A tightly-wound drum solo then speeds up the tempo. The piano and drums follow Horn throughout the song as her voice takes the melody into multiple different directions. Towards the end, Horn delivers a John Coltrane-style solo using only her voice to bend, pull and stretch the notes. She then returns to the words, singing out: “I’m feeling insecure/Love has got me sore/I just want to know more.” You’ve never heard someone sing about being insecure with so much darn confidence.