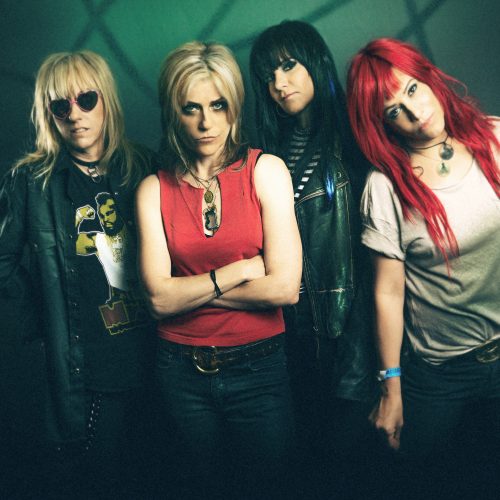 L7 – Hanging on the Telephone (The Nerves/Blondie cover)

Here at Cover Me, we’ve talked about “Hanging on the Telephone” before. Briefly, this song was released on an EP of a short-lived band, The Nerves, but it gained a new life when it was picked up by Blondie. “Hanging on the Telephone” became Blondie’s second single on the album that gave them mainstream status, Parallel Lines. Although the song starts with a different ringtone, the edge of the L7 version of this song is closer to the version by The Nerves. However, L7 replaces the simple guitar line and measured percussion with heavier guitar, including a short yet shredding solo, and more prominent drums. The melody in the vocals tapers off to a raspy caterwaul at times. Riot grrrls aren’t hanging on the telephone for anybody.

Let’s just reflect on how a song that repeats the lines “You’re a loudmouth baby / You better shut up / I’m going to beat you up” over and over again does not age well. Somehow, L7 manages to reclaim the “loudmouth” label, and by refusing to shut up, delivers an ironically delivered cover. The punctuating cymbal links the original and the cover. This cover was performed during the reign of the original drummer, Anne Anderson, before she was replaced in 1990 by Demetra Plakas.

Speaking of song lyrics that don’t vibe right, here’s another cringe worthy line: “I used to love her, oh yeah but I had to kill her/ I had to put her six feet under.” By changing the pronouns, again L7 twists the song in a way that makes us reevaluate the original. The Guns N’ Roses’s guitar is played with a lazy strum: just the usual laid-back discussion of killing someone. L7’s guitar playing is heftier, so much so that the vocals, when sung, are almost buried at times. Just when you think the guitar solo is taking over the song, though, the vocals re-emerge with a yell.

This song was written by Willie Nelson, but originally recorded by Faron Young (of “Hello Walls” fame) before Nelson reclaimed it for his own debut album. The upbeat sock-hop style music of the original distracts from the depressing lyrics: “Three days that I hate to see arrive / Three days that I hate to be alive / Three days filled with tears and sorrow / Yesterday, today, and tomorrow.” These lyrics sound much more at home in the L7 style, often recited rather than sung. In the middle of the song, there is an abrupt change from the forceful guitar and raw vocals to a style closer to the original. After a brief interlude with lighter, melodic singing and swing-style background music, the song transitions back to the L7 we know and love.

This Blue Öyster Cult song comes from the Agents of Fortune album that also brought us “Don’t Fear the Reaper.” L7’s style is similar to that of the original. The vocals are delivered a little bit more harshly, but the instruments match BOC’s stridency. Plus, I love a good cover that shows up in a movie; this one appeared on the soundtrack for the ’90s horror movie I Know What You Did Last Summer. Not the summer of love, indeed. This cover was made after bassist Jennifer Finch left the band in the mid-’90s, but she came back for L7’s reunion in 2015.

Want to learn more about L7? Check out the documentary about the band L7: Pretend We’re Dead.