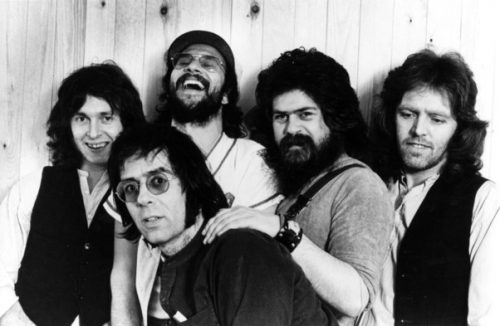 Manfred Mann is the stage name of South African rocker Manfred Sepse Lubowitz. The Earth Band was actually the third group to bear his name. The first incarnation, named simply Manfred Mann, scored hits with covers: 1964’s “Do Wah Diddy Diddy” and 1968’s “The Mighty Quinn.” The original group disbanded, but Mann himself later founded Manfred Mann Chapter Three in the late ’60s, then Manfred Mann’s Earth Band in the early ’70s. Legions of rock fans probably would have never heard of, or even thought about, “Blinded by the Light” had the group not covered it. In the pre-Internet age, many people did not know that the Earth Band version was a cover because they had no way of knowing there was an original.

Springsteen first released the track on his 1973 album Greetings From Asbury Park, N.J. While considered a classic among rock critics and hardcore fans, the album never sold particularly well by Springsteen’s standards. It took five years to go gold (500,000 units sold) and eighteen years to go platinum (1 million units). The second milestone is probably due to the fact that it was first released on CD in the U.S. in 1988 and many vinyl owners simply rebought it. Unless you had this album, there’s probably little chance you heard the original “Blinded by the Light,” as radio gave it little airplay and Columbia Records didn’t include it on any compilations or live albums until 2003. Even if you saw Springsteen live in concert, odds are you might not have heard him play it either, as Setlists.fm lists it as his 140th most played tune.

The only reason the song exists is that after Springsteen completed the album, Columbia president Clive Davis rejected it, saying there were no hit singles. So Springsteen wrote both “Blinded by the Light” and “Spirit in the Night.” From the lofty vantage point of history, Davis’ instructions would prove important for Springsteen’s career, though it did not boost the album’s initial sales. While “Spirit in the Night” would go on to become a staple of Sprinsteen’s live sets, “Blinded by the Light” flopped when released as a single. According to Rolling Stone, “So few copies of it were sold at the time, in fact, that stock copies of the original 45 are now among the rarest and most sought-after items in his extensive discography.”

Lack of commercial success does not diminish the quality of the song – it’s just not a radio-friendly arrangement. The Springsteen original comes across like a hybrid of Bob Dylan’s stream of consciousness ramblings and an early rock n’ roll song from another dimension. Springsteen famously wrote the lyrics with a rhyming dictionary on hand, which explains why they read like an exercise in word association. The song features a litany of phrases all strung together in a mind-bending series of rhymes. “And now in Zanzibar a shootin’ star was ridin’ in a sidecar hummin’ a lunar tune/ Yes, and the avatar said blow the bar but first remove the cookie jar we’re gonna teach those boys to laugh too soon.” While explaining the words to the audience during an episode of VH1’s Storytellers, Springsteen cautioned them, “Don’t overthink the whole thing.”

The Manfred Mann cover had an entirely different trajectory. Warner Brothers released it as the opening track to the group’s 1976 album The Roaring Silence. The band turned the track into a seven-minute, prog-rock-flavored epic, featuring multiple movements and sections as well as Thompson’s soaring vocals. There’s also a three-minute single edit, but the album version is far superior, with a nearly two-minute guitar solo and, most notably, the famous piano exercise “Chopsticks.”

After reaching the number one spot on Billboard in 1977, the cover became a staple of classic rock radio in the ensuing decades, giving it a near-endless second life. If there’s any lingering controversy about the song, it’s because when Thompson sang the word “deuce,” it sounded a lot like “douche.” I consider this to be a symptom of the pre-Internet age, when we couldn’t Google lyrics to find out what people were saying. So the song earned a place alongside “’Scuse me while I kiss this guy” or “No thought orgasm in the classroom” as one of rock’s great mondegreens. Both Springsteen and Mann have acknowledged that the lyrical misunderstanding probably spurred on the cover’s popularity. “I have a feeling that is why the song skyrocketed to number one,” Springsteen said on Storytellers.

Alas, the old saying “the reason academic arguments are so heated is there is nothing at stake” rings true here. So while “Blinded by the Light” might not be the best Springsteen cover, it is certainly one of the most important, and to my mind, it should have been on Cover Me’s top Springsteen covers list. Listen to it below and tell us what you think.

6 Responses to “In Defense: Manfred Mann’s Earth Band’s “Blinded by the Light””