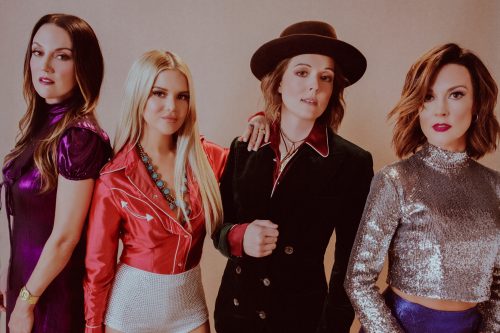 Country supergroup The Highwomen are wielding some killer harmonies and fierce lyrics as they tour in support of their upcoming self titled album due out September 6th. For the soundtrack for the movie The Kitchen, a high stakes drama about an all female gangster organization, the quartet performed a powerful rendition of Fleetwood Mac’s “The Chain”. They’ve since covered it a couple times live: at a recent visit to Howard Stern’s SiriusXM show and again sitting in a circle backstage at Jimmy Fallon’s show a few days ago – with Fallon himself. Both live versions also feature an uncredited Jason Isbell on guitar.

Brandi Carlile, Natalie Hemby, Maren Morris, and Amanda Shires have similar voice types which work wonderfully in a harmony heavy song such as “The Chain”. Much like the film it comes from, the cover is bold, beautiful, and intense. They stay mostly true to the original, but add gorgeous violin work by Shires. Isbell and Brandi Carlile’s longtime backing band of brothers Phil and Tim Hanseroth provide the accompaniment with guitars and a foot tapping beat.

Check out the cover below – both the studio version and the two live versions.