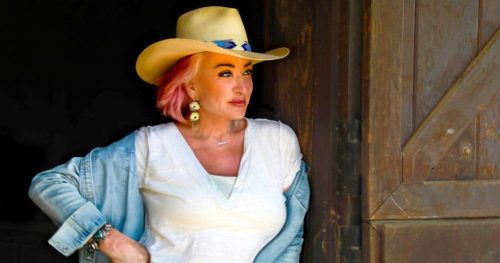 Life experience can transform a song. While Trent Reznor of Nine Inch Nails went deep into the emotional hell pit on “Hurt” in 1994, Johnny Cash’s 2002 cover took it even further, transforming the already heartbreaking into the emotionally devastating.

Like Cash, Tanya Tucker is a country legend. She was only 13 years old when she had her first hit record, 1972’s anthem “Delta Dawn.” And in the tradition of those “blessed” with huge success at a young age, she embarked in earnest on her mission to be country music’s wildest child. A female outlaw in the mold of Waylon and Willie, she became as famous for her partying, drinking, drug-taking, and relationship choices as she was for her music (check out her excellent, revealing autobiography Nickel Dreams for all the painful details).

Thankfully, thrillingly, she’s made it through the storm with her incredible voice intact and is now about to release her first album of all new material in 17 years. While I’m Livin’, produced by Shooter Jennings and Brandi Carlile, features new tracks written by Carlile and her band as well as a few key covers. One of the latter is her take on Miranda Lambert’s 2009 country #1 “The House That Built Me.” In the same manner Johnny Cash transformed “Hurt,” Tucker goes long and remodels the beautiful wistfulness of Lambert’s version into a pointed and powerful look back at her own life. She’s altered the lyrics slightly to reflect that story and, coupled with her raw, razor voice has created something both heartfelt and positively tear-inducing. It’s one of the most memorable performances of her entire career.

As mentioned, Tucker’s new album While I’m Livin’ features some additional covers and they are cool and eclectic ones: the Waylon Jennings/David Lynn Jones 1987 duet “High Ridin Heroes” and a version of Josefus’s meat and potatoes, roll down windows anthem “Hard Luck”.