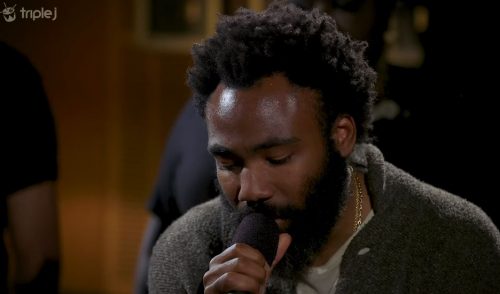 In 1999, country singer Garth Brooks ditched his signature twang and had an unlikely top five pop hit with the R&B song “Lost in You.” Had it just been an instance of a country singer recording a crossover hit, then we probably would not think much of actor-writer-producer Donald Glover singing the song as his musical alter ego Childish Gambino during an appearance on Australian radio. But since Brooks sang the tune as his own alter ego, Chris Gaines, on an album considered his biggest commercial and critical disappointment, the story may reveal a deeper meaning behind Gambino’s cover.

To fully understand the song’s history, we have to go back to the late ‘90s when Brooks was at the height of his commercial popularity. In the summer of 1997, he performed in front of an estimated 980,000 people in Central Park in New York City (full disclosure: I was there). He then followed it up with two albums, Sevens and Double Live. They both went Diamond, selling 10-million-plus albums, a category that barely exists today (only three artists have done it since 2007: Adele (twice!), Taylor Swift, and, whaddya know, Garth Brooks again).

In 1999, at the height of this unbelievable success, he did something completely different: He released Garth Brooks in … the Life of Chris Gaines, a “greatest hits” package by a fictional rock star. With music sung by Brooks, who appeared on the cover looking like a lost member of the Goo Goo Dolls, the album was billed as a pre-soundtrack to an upcoming film called The Lamb about the death of a fictional Australian rocker.

Brooks took on the role of Gaines like a method actor. The album was released with a publicity blitz that included numerous T.V. appearances and a fake episode of VH1’s Behind the Music. By Brook’s lofty expectations, the album was a complete flop. By anyone else’s standards, it actually did okay, selling two million copies and generating the one hit with “Lost in You.” Alas, because of its comparatively disappointing sales, the movie never materialized and the record has been mostly forgotten by time. The story surfaces occasionally as an example of a pop-cultural misfire, which makes Glover’s cover all the more intriguing.

In recent years, Glover has conquered all forms of media. His voice can presently be heard in every multiplex in the country as Simba in the remake of Disney’s The Lion King. Last year, he stole the spotlight as Lando Calrissian in Solo: A Star Wars Story. When he’s not starring in summer tentpoles or writing, directing, producing and acting on his T.V. show Atlanta, Glover moonlights as a rap star under the name Childish Gambino. Using this moniker, he recently took home multiple Grammy Awards for record of the year, song of the year and best music video for “This Is America.”

Glover/Gambino performed his cover of Brooks/Gaines’ “Lost in You”on the Australian radio station Triple J’s covers-themed show Like A Version. Backed by a five-person chorus and a lone keyboard, Gambino reinterprets the song with a striking blend gospel and R&B. He sings it with the seriousness of an artist taking on a master, rather than a pop-culture oddity.

Given the song’s complicated history, and Glover’s reputation as a master showman, we cannot help but think there was something deeper behind his decision to cover the track. Did Glover play it as a comment on the fickle nature of fame? Or is this part of some deeper plan to send Childish Gambino out in gigantic blaze of meta-narrative glory? It’s a fascinating cover song that leaves us simply wanting more.

Click here to listen to more covers of the actual Garth Brooks.

One Response to “From One Alter Ego To Another: Childish Gambino Covers Chris Gaines”