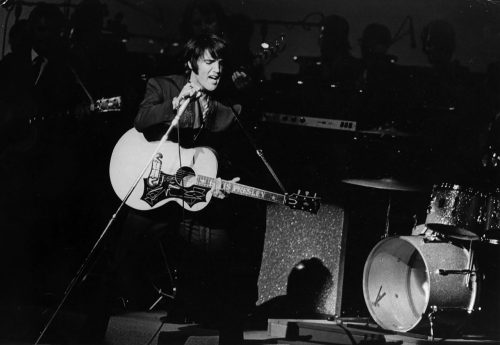 Fifty years ago in the summer of 1969, an event occurred that changed the face of American popular music forever. As swarms of baby boomers were heading to and from Bethel, N.Y., their older siblings – and possibly their parents – made pilgrimages to the desert to see the King. On July 31, Elvis Presley returned to the stage for a month-long series of concerts at the International Hotel in Las Vegas, his first live performances since 1961.

“Backed by a dream-team of musicians, two vocal groups and a 40-piece orchestra, Elvis relished the reunion with his fans, many of them housewives who had screamed for him as teenagers,” The Economist wrote in a recent article. “He played twice a night, seven days a week for four straight weeks and sold out every show.”

To commemorate the 50th anniversary of these performances, RCA/Legacy Recordings released Live 1969, an 11-CD boxset containing 11 full performances recorded from this run. It’s also available for streaming. The music from these shows has been released in various formats before, originally as part of the 1969 album titled From Memphis to Vegas/From Vegas to Memphis. But this is the most complete collection.

The full box set might be a bit much for casual fans, especially since most changes to setlists are minimal. As a historical document, though, it’s fascinating, especially hearing Elvis interact with his fans, whose adoration borders on religious mania. At certain points during the shows, you can hear him being interrupted by overzealous women storming the stage. Listening to these performances, even in small doses, you can understand why Elvis was able to captivate audiences in the latter part of his career. The shows feature Elvis in his full “Thank you very much” swagger. He merged numerous different musical styles together into concerts that were equal parts glitz and rowdy rock n’ roll.

The collection features Elvis covering a diverse batch of artists including Carl Perkins, Big Mama Thornton, Del Shannon, the Beatles, the Bee Gees and Ray Charles, among others. Here are a few highlights (and one misfire) from this extensive track list.

“Well, it’s one for the money/Two for the show …” And with those words Elvis 2.0 kicked off his twice-nightly shows with one of the most famous covers of the ‘50s. While rock n’ roll purists know “Blue Suede Shoes” was originally written and recorded by Carl Perkins, the song, and the style of footwear, will forever be linked to Elvis. The version here plays like a cover of his 1956 cover. The big band opens with a flourish of horns, then shifts into a souped-up electric guitar intro before Elvis comes in with Perkins’ immortal opening lines. A classic song retooled for a new age.

This was not Elvis’ first go-around in Vegas. In the mid-’50s he played a series of shows in the town, which generated a tepid response from the mostly older crowds. As Cover Me editor Ray Padgett chronicles in his book, during Elvis’ first time in Vegas he saw a fellow performer named Freddie Bell play a cover of “Hound Dog.” Written by Jerry Leiber and Mike Stoller, the song was an R&B hit for African-American blues singer Big Mama Thornton in 1953. But it was Bell’s arrangement of the song, complete with his own new lyrics “Ain’t never caught a rabbit…,” that Elvis ultimately covered. He turned into yet another one of the defining cover songs of the decade and his career. “Hound Dog” was a regular part of Elvis’ show in Vegas in 1969. He played it as a fiery piece of electric, rockabilly boogie. While not all of Elvis’ original hits worked with the Vegas-treatment, this track held up night after night as one of his best.

“If I’m not mistaken ladies and gentleman the guy that wrote the song is in the audience tonight,” Elvis told the crowd at the midnight show on Aug. 26. “I don’t think I met him, but I really dig the song. I’d like you to say hello to Del Shannon.” At Elvis’ request, the house lights came on and Shannnon received a polite round of applause. Shannon released his oft-covered classic “Runaway” in 1961. For his take, Elvis kept the piano track from the original largely intact, but his band adds in some eerie surf-rock style guitar, ideal for a Quentin Tarantino movie. When Elvis comes to the final chorus of “I’m a-walkin’ in the rain,” you can hear the full power of his voice. Hopefully, Shannon appreciated the cover, too.

“Nothing affected me until I heard Elvis,” John Lennon once said. “Without Elvis, there would be no Beatles.” Given Elvis’ influence on the Fab Four, his medley of “Yesterday/Hey Jude” should have been great. It offered him the chance to respond to the musical revolution he inspired. Sadly, Elvis plays “Yesterday” as a campy Vegas-style showtune. He then skips over the first part of “Hey Jude” and goes right into the “Na, Na, Na” outro. The end result is more of a pop cultural oddity than anything resembling a decent cover song. Thankfully, there is another option. Earlier that year, Elvis had recorded a much stronger cover of “Hey Jude,” which was eventually released in 1972. Check that one out here.

Despite his lackluster attempt at covering the Beatles, Elvis managed to take on the Bee Gees with some degree of mastery. Long before the Bee Gees discovered the dance floor, the family trio was known for its lush, dreamy pop tunes. With his backup singers adding in some gospel-style high harmonies, Elvis delivered this cover of the 1968 hit “Words.” Blending elements of country, pop and R&B, it demonstrated that he was equally adept at covering late ‘60s pop as he was playing his hits from the ‘50s.

“What I’d Say” was one of several Ray Charles covers Elvis played during these Vegas live shows, along with “I Can’t Stop Loving You” and “I Got A Woman.” The song was originally conceived by Charles while improvising on stage. He then recorded and released it as a two-part single in 1959. Elvis had first covered it for a soaped-up dance number alongside Ann-Margaret in the 1964 film Viva Las Vegas. Coming near the end of his live sets, “What I’d Say” began with a full-powered overload of funk then drifts into country rock for the final guitar solos. Elvis delivered the lyrics with an over-the-top performance that makes you want to gasp for air at the end. Forget Vegas, if he’d had the chance to play this cover at the Woodstock Festival that month, it might have won him converts from the hippie crowd, too.

This past weekend Elvis fans swarmed to Graceland to honor the fallen rock star who passed away on August 16, 1977. As we mark the 42nd year since Elvis’ death what better way to honor his memory than to rock out to some Elvis covers.