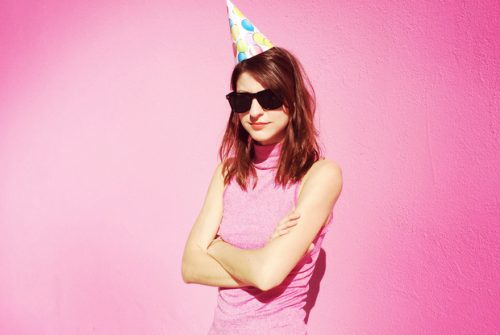 They’ve always been popular, of course – and appear to have remained so even after co-founder Tom DeLonge left to hunt aliens – but hardly something you would bring up around your hipper friends. But we’ve now seen two tribute albums in as many years. The first came from avant-garde bass player B.E.N. in 2017. And now rising indie singer-songwriter Colleen Green has released another, the literally-titled Blink 182’s “Dude Ranch” as played by Colleen Green. And get this: It’s also played entirely on bass. Bass players really love Mark Hoppus, I guess.

Before you Google it: No, 2019 is not Dude Ranch‘s 20th anniversary. That honor goes to their next album, Enema of the State – the album B.E.N. tributed in 2017 (Dude Ranch‘s 20th). But the time for bass-forward Blink-182 tributes apparently waits for no one. Colleen writes on Bandcamp:

I don’t remember where or when I got the idea to cover my favorite album of all time. Tbh, I don’t remember much of 2011. All I know is that sometime about 7/8 years ago, I decided that I was going to cover Blink 182’s “Dude Ranch” in its entirety…on bass. I borrowed a short scale from my friend Sandy Vu and gave myself 2 weeks to complete the project. 13 days later as I was applying the finishing touches, my computer started acting funny. I thought to myself, “Gee, I sure hope my computer doesn’t crash.” 14 days later, my computer crashed. I had no back ups because I always fly by the seat of my pants! I tried to recover my work to no avail. I was heartbroken, so much so that I was unable to revisit the project in earnest until October 2018. Today I can say with much pride, happiness, and relief that “Blink 182’s Dude Ranch as played by Colleen Green” is finally real and ready to be enjoyed by fans of Colleen Green and/or Blink 182. This was truly a labor of love and I hope that those fans can recognize and appreciate that. And to the band who has influenced me and my life in so many ways: Thank you.

Listen to three tracks below: “Waggy,” “I’m Sorry,” and, the album’s breakout hit, “Dammit.” Then buy it at Bandcamp. You don’t have to tell your friends you did.