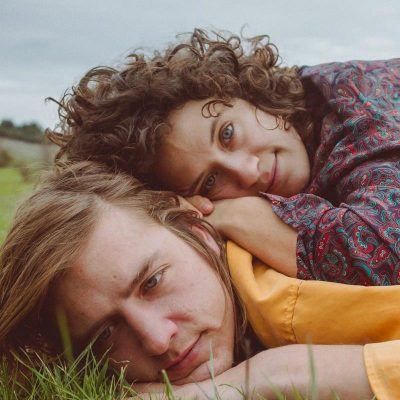 Anna Moss and Joel Ludford make up Handmade Moments, a jazz folk duo formed in 2014 after the break up of their original band Don’t Stop Please. Moss and Ludford developed a following in Arkansas and started to travel across the country performing. Unfortunately, in 2016 they hit a major setback when they were both involved in a serious bus accident, requiring time off from touring to recover. However, this recuperation period spawned their album Paw Paw Tree, released in 2018.

This duo has chemistry and a myriad of instrument capabilities; throughout their repertoire of covers, you’ll see them play saxophone, ukulele, guitar, upright bass, even beatbox. Whether it’s soul, funk, or hip-hop, Handmade Moments have the talent to tackle both classic covers and unexpected ones. Here are some of their best.

We’ll start with a classic song. “Tell Me Something Good” won a Grammy and launched Chaka Khan into the spotlight. Even in a boat, Handmade Moments can put on a good show. Moss’s voice is the definition of soul. It has a warm tone that never sounds forced. No wallflower in this cover, Ludford provides backup percussion via tasteful beatboxing and “tell me”s. He also gets as close as you can get to the original’s distinguishing “doo wah” syncopated backbeat on an acoustic guitar.

Keeping with the trend of covers made during transportation, here we have Handmade Moments covering “Love Train” on the road. They certainly do this Grammy Hall of Fame inductee and feel-good anthem justice. Their casual recording style highlights their raw talent; they make these spontaneous covers look effortless. The duo doesn’t even miss a beat when they have technical difficulties. Moss and Ludford make a good team, easily harmonizing and playfully singing back and forth.

Put your phone down and listen; we’re moving to more uncharted territory. This cover shows Handmade Moments’s talent for highlighting a hidden gem of a song. They take a lesser known Erykah Badu song off of her latest album and put their own spin on it, featuring beatboxing, ukulele, and upright bass. The original has just a simple backbeat and vocals, so switching to the beat being emphasized by beatboxing and bass tapping is not too much of a stretch. Moss’s rich voice even resembles Badu’s. The cheekiness of the video clearly being recorded on a phone adds a nice touch of whimsy.

Now we get to see what Handmade Moments can do with a more sophisticated recording setup, and yes, Moss plays upright bass too. You may know DRAM from his breakout hit “Broccoli;” this song is from the same 2016 debut album. The song’s syncopation lends itself to the duo’s signature percussion pairing of beatboxing and bass slapping. DRAM’s slightly halting, speak-singing contrasts sharply with Moss and Ludford’s smooth harmonies. Ludford in the role of hype man is endearing, and the pair trades off easily, allowing both of them to shine.

Handmade Moments – Are You That Somebody (Aaliyah cover)

Going back to basics, performed on the back of a moving carriage, this is the real star of Handmade Moments’ covers. I just learned that this ’90s Aaliyah song was recorded for the Dr. Dolittle soundtrack, and I’m not sure how to process that information. Moss and Ludford both have such a sense of rhythm that the ever-changing beat in this song doesn’t daunt them. Again, Moss’s voice is capable of living up to another hip-hop and R&B staple, and Ludford really commits to the rapping, handling Timbaland’s guest part without sounding ridiculous. I have no other words; I’m obsessed! Handmade Moments are not just anybody.