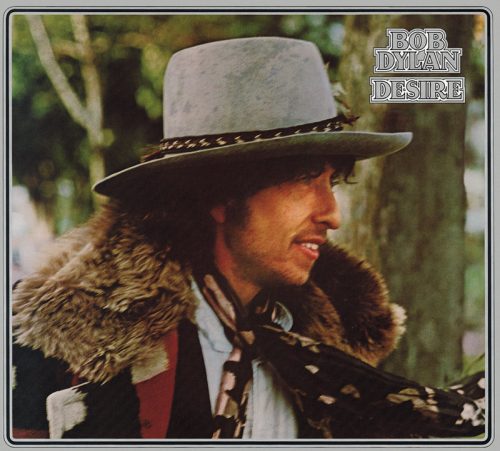 Time Out of Mind beat Desire by a single vote, and you can read our resulting cover-by-cover breakdown here. But – surprise! – today we’re tackling the runner-up as well.

This summer has been a big one for Desire. Martin Scorsese’s mostly-kinda-sorta-true Rolling Thunder Revue documentary divided music fans, but the accompanying live box set earned universal acclaim. And at every show on it, Dylan and his rotating cast of folk misfits performed many songs off the not-yet-released album. The attention sadly hasn’t led to a slew of new “Isis” covers – musicians, it’s not too late! – but we’ve seen songs from the album get covered at a steady rate over the years. Jack White alone seems to have covered half of it.

So today we post the best cover to every song on one of Dylan’s great 1970s albums. Covers range from violinists mirroring Scarlet Rivera’s distinctive sound to some wild sonic departures into garage rock and flamenco. The album only contains nine songs, but they build a whole world. These covers add new pieces to it.

P.S. We’ve got more Patreon polls to dictate upcoming features coming up and I hope you’ll consider supporting us there. It’s what keeps the proverbial lights on here, after ad rates across the web have plummeted. In the Dylan-album poll, a single vote made the difference – next time, that single vote could be yours!

Despite being the album’s lead single and the song that was so widely discussed and dissected at the time, “Hurricane” gets a lot fewer covers than you might think. That might be partly the “protest song” stigma – Dylan’s topical songs about specific historical incidents and figures seem to have a shorter shelf life than the more general protest pieces like “Masters of War.” But back in 2016, Jason Isbell and Amanda Shires broke it out at a Dylan tribute show in Nashville. A natural fit, perhaps, with Shires playing the violin a la Rivera. Unlike Scarlet, Shires sings on it too. Still wish they’d released a proper live album from these great shows, but, until then, this pretty-good bootleg recording will have to do.

Jack and Meg clearly loved Desire. They covered “One More Cup of Coffee” a bunch, and “Isis” even more. It makes for a nice contrast with the original, stripping one of Bob’s more musically-involved songs down to the garage-rock basics. Jack’s done plenty of interesting stuff since, to be sure, but hearing something this raw and powerful makes one really miss the Stripes.

Why don’t more people cover “Mozambique”? There are pretty much no studio covers to speak of, only a handful of shaky YouTube performances, and a few live takes by various jam-inflected bands. Max Creek’s is the most blissfully jammed-out, but the vocals are so rough it’s hard to get all the way through. So we’ll instead highlight Anders Osborne, who seems to bring the song everywhere he goes. Joan Osborne played it a couple times in 2018? Turns out it’s this other Osborne singing. Phil Lesh and Friends did too, in 2013? Well guess which “friend” took the lead. Osborne’s never recorded it professionally, but the best-sounding video we could find is this acoustic take at his own show in 2017.

Sertab – One More Cup of Coffee (Valley Below)

The most-covered song on Desire by far, “One More Cup of Coffee” boasts almost as many covers as the rest combined. Also maybe the best-covered track; I don’t know if I’ve ever heard a version I didn’t like. The White Stripes’ previously noted version is a beauty, Steve Earle & Lucia Micarelli deliver wonderful harmonies on theirs, and Roger McGuinn – perhaps history’s premiere Dylan-coverer – blends wonderfully with Calexico on the I’m Not There soundtrack. My all-time favorite, though, hails from another Bob-movie soundtrack: Masked and Anonymous. Turkish singer Sertab Erener pushes the song’s Middle Eastern influences to the fore, with swirling violins, some wonderful percussion, and tasteful electronic beats.

Sick To The Back Teeth – Oh, Sister

Andrew Bird and Nora O’Connor do a lovely version of this “Oh, Sister” (notice how violinists tend to cover Desire songs?), with acoustic guitar and some nice whistling interludes. Honestly, there’s a good chance you’ll like that better than the one I picked. But we’ve just had a few tasteful coffeeshop-y covers, so it felt like it was time to get weird. Last year, experimental art-rock group Sick To The Back Teeth released this unnerving version. It’s just organ and deep, deep singing (almost more like speaking at times), but somehow seems creepier than its simple instrumentation would imply.

Like “Hurricane,” the topical “Joey” also almost never gets covered. The only cover of note is Johnny Thunders’ – but it’s the only one you need. He first released it on his 1983 acoustic album Hurt Me, skipping most of the lyrics and changing the few he did bother with. The plot, such as it is, makes zero sense in Thunders’ radically truncated wording, but his delivery sells it. Even better is this 1990 televised performance with a sax player. It’s one of his final performances; he was dead a year later.

Dylan’s “Romance in Durango” features a few lines in Spanish, so it feels only appropriate that many of the covers complete that translation. This one takes it into Portuguese, from Brazilian stars Zé Ramalho and Fagner. It’s got over a million views on YouTube – the song must be a bigger hit in Brazil than it ever was here. Maybe Bob should bring it back out of retirement like in did just once in 2003.

Sketchily-filmed YouTube covers usually show up only when we get truly desperate to complete a Full Album with a rarely-covered track. And “Black Diamond Bay” has been covered so infrequently, I felt sure we’d land there. So imagine when my surprise when one of those sketchy-looking YouTubes turned out to be absolutely gorgeous. Austin-based composer Ben Johnson rearranges the song into a stunning piano ballad, his simple but evocative playing backing truly beautiful singing. It’s almost 13 minutes – five longer than the already-long original – but rather than dragging, that extended length draws you further and further in.

We keep the mellow piano mood going with one of the preeminent Dylan cover artists out there, English cabaret singer Barb Jungr. She’s released three albums of Dylan covers, and not one is superfluous. Jungr gets deep inside the lyric, making one of Bob’s most explicitly autobiographical songs – it’s literally named after his soon-to-be-ex-wfe – feel universal.