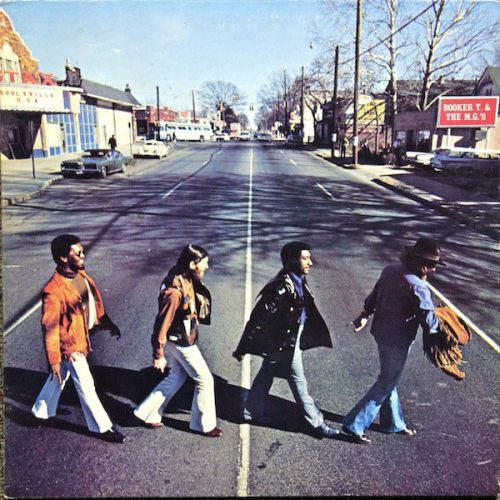 From their earliest records, The Beatles acknowledged their debt to the African-American artists who informed their sound. Much of their first two records were a tour through soul, R&B, and female vocal groups. By the end of the 1960s, as The Beatles were breaking up, African-American musicians were paying back the tribute by performing covers of the Fab Four.

One such notable cover was the entire album reinterpretation of Abbey Road by Booker T. & the MGs titled McLemore Avenue. The entire artistry of this album is an homage to Abbey Road. Released in April 1970 when The Beatles officially broke up, McLemore Avenue is like a musical funeral for the band and for the decade that they, in part, helped to define.

While The Beatles never covered anything by Booker T. & the MGs or from Stax Records, they were interested in recording parts or all of Revolver in Memphis. It is also possible that they paid their respects to southern R&B and soul in their instrumental “12 Bar Original.” Recorded in 1965, this song did not get released until 1995’s Anthology series. It comprises the same groove as “Green Onions” as well as the wailing lead guitar cutting across the grain of the rhythm. The Beatles were dismissive of this song. John Lennon called it a “lousy 12 bar” when once asked about unreleased Beatles tunes. Yet this jam showcases just how tight the band was and how they drew inspiration from the blues, a genre that they would make much more use of in the second half of their career.

Booker T. Jones found inspiration in Abbey Road upon its release in September 1969. In a 2009 interview with The A.V. Club, Jones recalled:

I was in California when I heard Abbey Road, and I thought it was incredibly courageous of The Beatles to drop their format and move out musically like they did. To push the limit like that and reinvent themselves when they had no need to that. They were the top band in the world but they still reinvented themselves. The music was just incredible so I felt I needed to pay tribute to it.

Jones did more than pay tribute to the music (more on that later). He chose to make the album art and name as tributes. The name, McLemore Avenue, is in reference to the address for Stax Records just as Abbey Road is a reference to the address for EMI Studios in London. The photo on the album cover is a recreation of The Beatles’ famed walk at the zebra crossing on Abbey Road; in this case, Booker T. & the MGs cross McLemore Avenue. There are stark differences in the two photos. Whereas The Beatles’ photoshoot was in early August 1969 the shoot for McLemore was in early 1970. Abbey Road features lush greenery lining a London street beneath a blue sky at midsummer. McLemore’s view is more bleak. Bare trees accompany homes across from storefronts under the pale blue of a winter afternoon. It’s a somber view, one that conveys the disillusion at the end of the 1960s.

The opening notes to “Golden Slumbers” capture that disillusionment. The medley that takes up most of side one begins like a prelude to a funeral, in which Booker T.’s iconic organ soulfully carries the melody. The medley lifts through “Carry That Weight” and “The End” before slowing to a jaunty groove of “Here Comes the Sun” and finishes with a rendition of “Come Together” that rivals the original.

Booker T & the MGs – Something (The Beatles cover)

Side one concludes with George Harrison’s “Something,” which also served as the lone single from McLemore Avenue. The piano and guitar in the opening of this song maintain the same sweet and lilting sound of the original. And the organ carries the melody beautifully. However, Donald Dunn’s bass leaves something to be desired. Also, the bluesy jam that comprises the second half of the song is out of sync with the ethos of the tune. Given that Harrison envisioned this song to sound like a Ray Charles ballad, it should have been a slam dunk for Booker T. & the MGs. However, it may be the weakest song on the whole album.

Side two opens with another medley. This time, we get “Because.” It opens with a dark tone with the synthesizer and bass. When Jones’s organ comes it, it is a reassuring sound that comforts the listener that not all is lost. And Steve Cropper’s guitar playing is a welcomed change from the vocal harmonies that characterized the original. The medley transitions to a funky version of “You Never Give Me Your Money.”

Booker T & the MGs – Sun King/Mean Mr. Mustard/Polythene Pam/She Came in Through the Bathroom Window/I Want You (The Beatles cover)

The conclusion to the album is a tour through Abbey Road’s medley of “Sun King/Mean Mr. Mustard/Polythene Pam/She Came in Through the Bathroom Window.” The opening is spot on, with Dunn nailing McCartney’s original mood. Al Jackson’s drumming is excellent and more diverse from Ringo’s, opting to change up his fills during the transitions. On “She Came in Through the Bathroom Window,” the MGs return to a funky jam that excels beyond The Beatles’ capacity. The medley closes with “I Want Your (She’s So Heavy).” The MGs chose not to open with the descending arpeggio on the original. Instead, Cropper’s thick and overdriven guitar carries the melody. At later points in the jam, he takes liberty to improvise on the melody. Where there are moments of the descending movement, it lacks the same dark tone as the original. This may have to do with the lack of deep bass as in the original. Jones’s organ on this tune wails in a way that you long for on the original.

Like a funeral, McLemore Avenue takes you on a journey through the emotions of grief, fear, and celebration of life. And at the exact moment that the music world—and the world in general—was encountering these emotions, Booker T. & the MGs offered a tribute to serve as the processional.