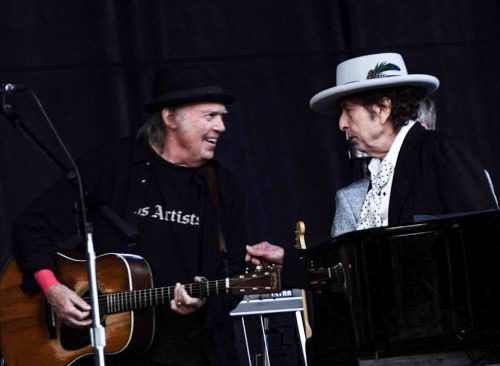 In 1975, months before the Rolling Thunder Revue began, Bob Dylan joined Neil Young for a huge benefit concert in San Francisco. As if that wasn’t enough, three-fifths of The Band joined them too: Levon Helm, Rick Danko, and Garth Hudson. The spontaneous supergroup performed ramshackle versions of a few Neil Young songs (“Lookin’ for a Love,” “Helpless,” “Are You Ready for the Country?”), a few Dylan songs (Bob’s first-ever live “I Want You” and a weirdly retitled “Knockin’ on Dragon’s Door”), and a few covers. The final song they performed was one of those covers, a raggedy but charming version of country standby “Will the Circle Be Unbroken,” popularized in the 1930s by The Carter Family. Here’s a stream:

Forty-four years later, they’ve done it again. Last night, Dylan unexpectedly brought Young onstage halfway through his show in Kilkenny, Ireland. It would have taken a true Dylanologist to guess they’d reprise the last song they played together in 1975, which Dylan has not played since (Young has at a couple Farm Aids). Not only did they bring it back, they greatly improved on their first try. The two trade verses and join together on the chorus, with Bob’s ever-tight band behind them. Bob says nothing, as you’d probably expect. Watch the new version below, and see how it compares to the 1975 take.