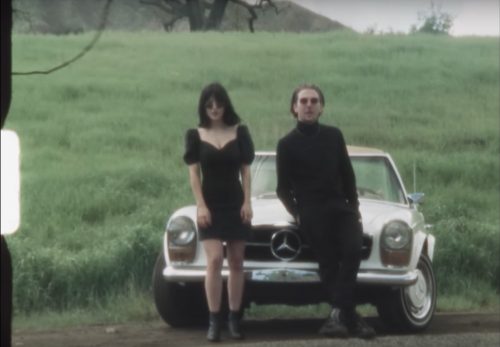 Britney Spears recently checked herself into a mental health facility amidst rumors she was trying to end her unusual conservatorship, reigniting the #FreeBritney campaign (the whole thing’s too complicated to get into here, but the Times has a good explainer). Everyone from Miley Cyrus to Heidi Klum spoke out in support of Britney – and, in their own way, so have new LA dream-pop band The Marías. They just released a video for their cover of “…Baby One More Time,” originally released a couple months before the latest news but newly relevant.

They wrote on Twitter, “we recorded ‘baby one more time’ to try to get us out of a funk that we were in. it was just for fun to help lift our spirits, and we didn’t even plan on releasing it at all. thanks for the love on it.”

The cover is gorgeous, all muted tones and gauze shimmer. It sounds more Lana Del Rey than Britney Spears, with a wonderful “Oops! I Did It Again” nod at the end. And the video amps up the blissed-out aesthetic, evoking old family film reels while the quartet – leader María plus her band dressed in matching shades and turtlenecks, like some sort of Steve Jobs film noir – delivers some funny little dance moves. Watch it below.

One Response to “The Marías Unveil Dream-Pop Britney Spears Cover”