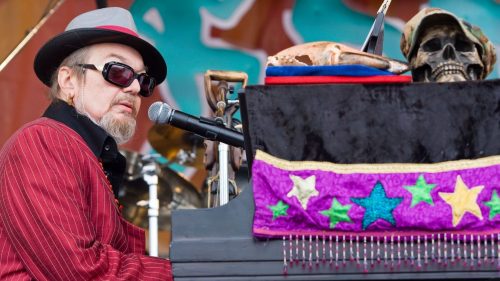 It is astonishing that there has never been a post on this site dedicated to Dr. John, aka the Night Tripper, aka Mac Rebbenack, whose candle finally snuffed this week after 77 years. Indeed, it seems positively shameful, given the number of covers he performed, often bringing new life to songs and genres long deemed dead or forgotten, at least by this generation. In the voodoo lore he adopted as his early image, his spirit now has a year and a day to drift free in the wilderness, before ceremonially starting in a new life.

Malcolm John (Mac) Rebennack was an already experienced session man – initially a guitarist, he switched to piano after losing a finger in a shooting incident. The finger was sewn back on, but remained numb, more suitable for tinkling keys than bending notes, he becoming arguably the prime exponent of New Orleans boogie-woogie rolling piano, not a bad feat for a second instrument.

At the age of 27, he took on the Dr. John mantle. Drawing influences from voodoo ritual, the plan was that Rebennack would mastermind a stage show enacting the life and times of Dr John Creaux, a larger-than-life shaman, peddling of amulets and spells. He would be musical director and an old-time friend, Ronnie Barron, would play the part. Barron dropped out and Rebennack stepped up, playing his own creation in robes, beads and feathers. The music combined tribal rhythms with r’n’b, psychedelic rock and jump jive, introducing many longhairs to the delights and surprises outside of a standard rock music model. Gris Gris, his debut, came out in 1968.

Gradually, whilst retaining the name, he became less Dr and more Mac, the music incorporating even more the traits and tropes of his beloved home town, his playing an ever funkier amalgam of styles, long before funky meant funk. By 1973 he had near ditched the ceremony, and, hooking up with Allen Toussaint and the Meters, he was now embracing his role as unofficial ambassador of a New Orleans heritage to the rest of the world. “In the Right Place,” from that year, certainly lived up to its name, with no small successes in the album and singles charts.

By the later ’70s he was digging back deeper into his roots. A long association with ’50s songwriter Doc Pomus was one aspect of this, but he also developed an interest in the standards he had grown up with, the songs of so-called Tin Pan Alley. No swish string-drenched great American songbook these, this was his unmistakeable drawl and his bar room piano. He was also playing an enormous number of sessions, playing with artists as varied as Harry Connick Jr. and UK pharmaceutical rockers Spiritualised, as well as memorably featuring in the Band’s concert and film The Last Waltz.

The ’80s and ’90s were a quieter time. Consistently working, if away from the limelight, and touring, he could often crop up in small London venues, hooking up with local musicians, with whom he produced Anutha Zone. Coming after a number of albums on jazz labels, this was a return to the voodoo persona, featuring Paul Weller and members of Primal Scream. Not for the first time, an American performer was finding renewed credibility far from home. The success of this was muted, however, and his next disc was a tribute to Duke Ellington.

Ironically, it was disaster that possibly fueled his later burst of fame this century. He may have milked the heritage shtick dry with 2004’s N’Awlinz: Dis, Dat or D’Udder, but Hurricane Katrina drew attention and focus anew, and by the time of 2014’s Dan Auerbach-helmed Locked Down, any lost credibility had been fully restored. His appearance in HBO’s boxset blockbuster Treme did likely no harm either, Mac playing yet another thinly disguised version of himself. Fitting to this site, his last recording was Ske-Dat-de-Dat: the Spirit of Satch, in 2014, an all-cover tribute to Louis Armstrong. Which makes as good as any a place to fire off a run of his best covers. Inimitable, he treats all songs, all styles as his own, stamping on instant recognition of who it is, playing and singing, if not necessarily the song.

Dr. John – It Don’t Mean a Thing If It Ain’t Got That Swing (Duke Ellington cover)

2 Responses to “In Memoriam: Dr. John”