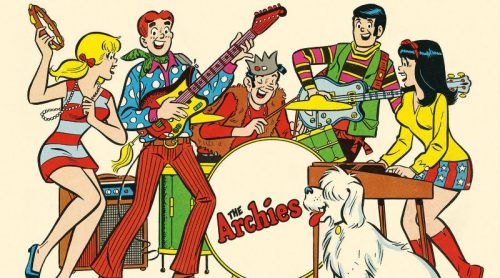 I used to work in the music department of a chain bookstore. One day a customer came in and asked, “Do you have a copy of the song ‘Sugar, Sugar’?” We did, of course; I took him to the Various Artists section and handed him a copy of Billboard Top Rock ‘n’ Roll Hits: 1969.

“Thanks,” he said. “I have to learn this song for a lip-sync for work.” He grimaced.

“Wait,” I said. “If it doesn’t matter what version you lip-sync to…”

In a twinkling he was holding a Very Best of Wilson Pickett CD, containing Pickett’s classic “Sugar, Sugar” cover. “Yes!” he said, eyes alight. “This has songs on it I’ll actually want to listen to more than once!”

The Wicked Pickett’s version is indeed eternally worthy of relistening, but I don’t want to slight the Archies song. Sung by Ron Dante and backed up by Toni Wine (who turns 72 today!), it’s the perfect AM rock song, the #1 song of 1969, one that Lou Reed once admitted he wished he’d written. It’s been remade for Archie-related live-action TV shows, not once but twice. And it’s raked up a lot of covers – including some by artists you never would have guessed…

F’rinstance, would you have guessed that before Bob Marley caught a fire, he chewed a little bubblegum? Marley and the Wailers’ cover of “Sugar, Sugar” was only released in the United States, likely as not in an effort to gain success via airplay. They perform the song engagingly, but as the evidence would soon show, Marley was better suited to bigger messages.

Post-Box Tops, pre-Big Star, the teenaged Alex Chilton began recording his first solo material in 1969. He was leaving his gruff soul vocals behind and hadn’t yet landed on his keening pop voice, so he tried on a number of masks in the privacy of the studio. Here, he does a sloppy, half-joke cover of “Sugar, Sugar,” throwing a little James Brown into the mix for good measure. One listen to this and you’ll understand why the Replacements worshipped at the Church of Chilton.

1975’s A Little Knight Music was a cynical cash grab, but not on Gladys Knight’s part. She and the Pips had left Motown for Buddah, and as they were reaping the benefits of having a smash hit in “Midnight Train to Georgia,” their former label opened up the vaults and grabbed whatever they could find to put in an album format. Their “Sugar, Sugar” might not have been intended for the light of day, but as Robert Christgau noted, “there’s something in her voice, a hurtful rough place the honey missed, that makes me want to listen.”

The Ike & Tina Turner album Delilah’s Power was released a year after their breakup. Anyone looking for clues within might have found them in the titles of Tina’s originals – “Too Many Women,” “Too Much For One Woman,” “Unhappy Birthday,” etc. But the Turners’ “Sugar, Sugar” has all the same grits ‘n’ grease with none of the anger or resignation of their non-covers.

Chet Baker’s 1970 album for Verve was titled Blood, Chet and Tears. Give it this much: It’s a better title than Chet Baker Sells Out, which is what it amounts to. He covers hits of the late ’60s, in an attempt to cross over to the rock market. It’s most evident, though, that his heart isn’t in it. Still, if you want some jazzy easy listening sounds of the era, you could do worse than listen to his instrumental version of “Sugar, Sugar.”

Here’s a bonus “Sugar, Sugar” from an artist not nearly as well known as any of the above, but who might have the inside track to having the best of these half-dozen covers. The Blue Orchids’ cover came out on their 2004 album Mystic Bud, and it sounds like that’s what they were on when they recorded “Sugar, Sugar.” The song has a dreamy, druggy feel – allmusic.com compares it favorably to the Velvet Underground’s “Heroin” – and the swirling haze alters the whole feel of the song from G-rated horniness to slow-motion realization of love.