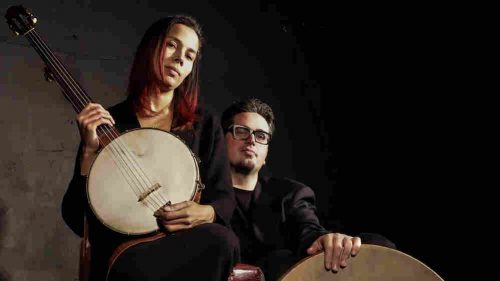 2019 is shaping up to be a banner year for folk singer Rhiannon Giddens. In February, she appeared on an album called Songs of Our Native Daughters, a collaboration of four women reclaiming the African-American roots of Americana and bluegrass music. This coming fall, she will be featured in the latest Ken Burns documentary Country Music. On May 3, Giddens and jazz multi-instrumentalist Francesco Turrisi released a new album entitled there is no Other. The record includes a stunning take on the folk standard “Wayfaring Stranger.”

In its many versions, “Wayfaring Stranger” tells the familiar tale of a lonesome wanderer seeking salvation. “Some historians have traced its genesis to the 1780s, others, the early 1800s,” according to The Bluegrass Situation. “Depending on who you’re talking to the song may be a reworked black spiritual, a lifted native hymn, or even a creation of nomadic Portuguese settlers from the southern Appalachian region.” “Wayfaring Stranger” has been covered countless times in the 20th and 21st centuries by the likes of Bill Monroe, Joan Baez, Johnny Cash, Emmylou Harris, Jerry Garcia, Jack White, and the Mormon Tabernacle Choir.

Giddens’ version fits in well with the rambling, earthy spirit of her new album. The song is wedged in between a cover of folk singer Ola Belle Reed’s “I’m Gonna Write Me a Letter,” and the instrumental title track “there is no Other.” “Wayfaring Stranger” features Giddens on banjo and Turrisi on accordion. With her voice, Giddens takes the familiar tune to another realm, playing up the song’s country-gospel roots. As she sings “I’m going home to meet my savior,” it’s enough to make anyone want to convert, no matter what your creed.

Click here to listen to more covers by Rhiannon Giddens.