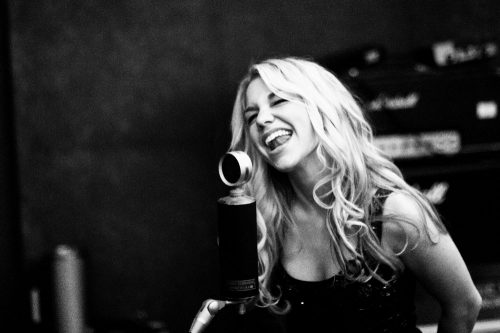 Odds are you’ve heard Kari Kimmel’s music, whether you realized it or not. The composer has penned songs and scores that have, by her own count, appeared in more than 650 different movies, T.V. shows, video games, trailers and commercials. In addition to her work behind the scenes, Kimmel has released a number of solo albums and EPs. For her latest effort, Kimmel recorded a cover of Bananarama’s “Cruel Summer,” which appeared in both the trailer and final episode of Cobra Kai season two.

Cobra Kai is a reboot of the Karate Kid franchise, where Ralph Macchio and William Zabka revive their respective roles as Daniel LaRusso and Johnny Lawrence. The plot follows the two rivals, as well as their kids and protégés, 34 years after their leg-sweeping and crane-kicking clash at the All-Valley Tournament. The show pays homage to the ‘80s while poking fun at those who can’t seem to “wax off” the past.

Daniel and Johnny’s mutual animosity isn’t the only thing revived from the original film. Though Bananarama first released “Cruel Summer” in 1983, it only became a hit in the U.S. when it appeared in The Karate Kid in 1984. The song provided the backdrop to Daniel’s first day of school in California. With such a connection to the past, it’s an ideal track for an update.

For her cover, Kimmel drops the dance vibe of Bananarama’s original. Instead, she slows down the verses, layering in sound effects and a western-sounding guitar. When she sings the opening lines of the chorus, “It’s a cruel summer” the background music explodes with strings, keyboards and backing vocals. Kimmel’s cover clocks in at just over two minutes, leaving you wanting more. Perhaps Kimmel will be back next season with a cover of “Glory of Love.”

Click here to listen to other Bananarama covers, including Hailey Tuck’s version of “Cruel Summer,” which earned a spot on Cover Me’s Top 50 list in 2018.