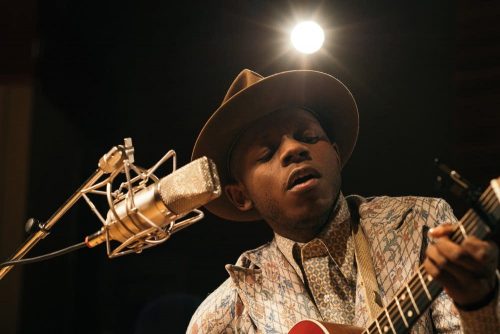 Growing up in Nairobi, Kenya listening mostly to rock music, Ondara apparently always thought that “Knockin’ On Heaven’s Door” was a Gun’s ‘N’ Roses song. After he lost a bet to a friend who told him that the song’s true origins, folk music became his passion. And so began his travels down the Dylan rabbit hole that eventually lead him to Minneapolis, in Dylan’s home state, to pursue his career.

His treatment of “Blowin’ in the Wind” for YouTube’s Mahogany Sessions seems to be his first official recorded cover version of a song written by his idol. And he absolutely nails it. The song selection itself was a brave choice, given the iconic status it holds in the pantheon of distinctly American classics. Many of the greats have covered the song including most notably Willie Nelson, Sam Cooke, The Byrds, and Peter Paul and Mary. (My own personal favorites are Stevie Wonder’s openly honest version and Neil Young’s epic ramshackle take on the song as performed on Weld Live.)

And now, I am adding this one to the list. Mahogany Sessions filmed him in what appears to be a modern speakeasy, Ondara sitting by himself in a booth, just the young man and his acoustic guitar. You hear him a capella before you can see him, as the camera slowly pans down the walls of the bar before reaching an artist completely absorbing himself in the song. The emotion that emanates from his voice and his guitar will stop you in your tracks. With performances like this, the question is what’s next for this rising star. The answer, my friends, is blowin’ in the wind.

One Response to “Kenyan Americana Breakout J.S. Ondara Spakles on “Blowin’ In The Wind” Cover”