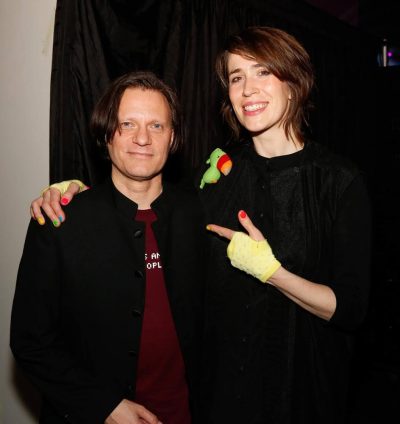 Frou Frou is officially back! After a fifteen-year hiatus, we can look forward to new music and a tour from Imogen Heap and Guy Sigsworth. And although true fans may prefer some deeper cuts, we are all united by the nostalgia triggered by the distinctive opening bars of their most popular song, “Let Go.” Whether the song takes you back to the ending scene of Garden State, or you experience it anew in Wiz Khalifa’s “In the Cut,” Frou Frou’s “Let Go” speaks to the overworked, the overwhelmed, and the overcautious.

Although they originally had a brief run as a duo in the early 2000s, Heap and Sigsworth have been consistently working on individual projects since they went their separate ways. Heap’s recent work includes the music for Harry Potter and the Cursed Child and collaborating on Taylor Swift’s “Clean.” Sigsworth’s includes writing for Britney Spears and Alanis Morissette. Now, they’re rounding out the 2010s with a reunion.

Few have been willing to take on Frou Frou’s anthem of the manic pixie dream girl, but these covers are able to put their own spin on the breathy and ethereal original.

The Laila Biali cover is better.

And the A Static Lullaby cover is best.

Boys Like Girls was a pop rock band formed in the mid-aughts. Most known for hits like “The Great Escape” and “Love Drunk,” it is tempting to write them off as one of the many angsty boy bands of the time. However, their cover of “Let Go” shows a greater depth. Swapping acoustic guitar for the traditional orchestral strings, the Boys Like Girls version provides a noteworthy coming-of-age edge while remaining faithful to the overall vocal style. Impressively, they really nail Heap’s particular trilling style on the even lines. The song transitions from a faithful cover to something a bit more individualist during the interlude. Here they let their pop rock roots take over, wrapping up a solid rendition of “Let Go.”

Jazz pianist and vocalist Laila Biali starts her cover with a choral introduction and an a cappella chorus. She then proceeds with jazz piano flair, changing the pace of the song to be a bit more upbeat than the original for part of the song before transitioning back to the slower tempo we expect. The bass and sax solos throughout elevate the performance from a mere cover to a fusion piece, bringing the song to Biali’s jazz turf. Biali has a light voice similar to Heap, but she doesn’t force her singing style to match that of the original. Overall, Laila expertly makes the song her own while giving original “Let Go” fans a performance they won’t soon forget.

Arguably, A Static Lullaby’s most popular cover is of Britney Spears’ “Toxic,” but their “Let Go” cover garnered them attention during a transitory period. At the time of this cover, the band was rebranding: changing labels and transitioning to a new lead guitarist, bassist, and drummer. What better way to relaunch into music society than a surprising cover choice? Although a polarizing genre, screamo has much to offer “Let Go.”

In A Static Lullaby’s version, the slightly faster tempo gives us a premonition that there is something different about this cover. By the time we get to the first raw scream of “let go,” we know we are in for an aural ride. Although the lyrics could be interpreted as a hopeful call to action, this rendition makes you feel the other side. With a mix of singing and screaming, in tandem and solo, the emotions that would lead up to having to “let go” are evoked. What makes this cover really shine is that Frou Frou’s imploring lyrics match the vocals, albeit in an unexpected way: urgent and with feeling bordering on desperation. While Imogen’s voice brings the beauty, A Static Lullaby brings the breakdown.