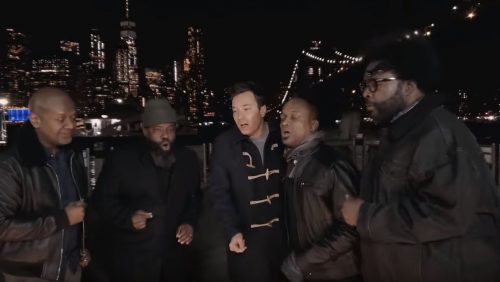 The song turned up on late night TV last week when Jimmy Fallon and the Roots sang an acapella rendition on The Tonight Show. For the episode on Monday, March 25, Fallon travelled to various locations around the city. While driving through Brooklyn, he described how his father once sang in a doo-wop group. “I thought maybe tonight why not pay homage to the doo-wop singers out there.”

It was a perfectly crafted New York-scene with the Manhattan skyline and the Brooklyn Bridge in the background. Fallon took on lead vocal duties and even hit the high notes. Members of the Roots provided a steady stream of “shoo-doo, shoo-be-doos” and other harmonies. Together, they simply performed the song the way it was meant to be sung, on a street corner.

Click here to listen to more covers by the Roots.