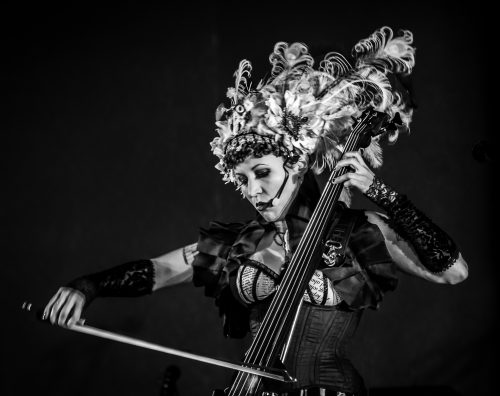 For a cellist who frequently covers new wave, goth, and art-rock songs, David Bowie’s “Heroes” would seem one of the more obvious song selections. But San Francisco’s Erica Mulkey, who performs as Unwoman and appears regularly at sci-fi and steampunk conventions, says she resisted “Heroes” for years. Though one of her favorite songs, it seemed too obvious, and too often covered. Hard to find a fresh way to do it, especially after his passing. But backers on her Patreon pushed her to do it, and she ended up happy they did.

“It is the kind of song I aspire to write: heavy with the reality of oppression, yet aloft with love and possibility,” she says. “It’s been covered and reworked so many different ways and I’m really glad I was pushed to perform my take on it.”

To make the song her own, Mulkey stripped everything away except her voice – layered beautifully near the end – and cello, along with a snaking piano line. It makes fresh a song that’s been covered almost to the point of cliché. Listen exclusively below, they preorder her 30-track covers album Uncovered Vol. 4-5 (out March 8) at Bandcamp.

Check out more Unwoman covers in our archives – including the Prince cover she recorded exclusively for our 10th anniversary.