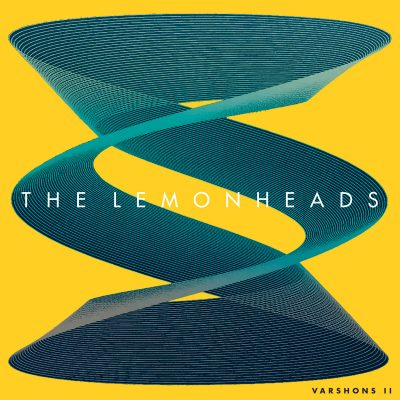 What a strange and contrary man Evan Dando seems to be. Liked and lauded beyond any reasonable appraisal of the breadth of his output, nonetheless he seems a decent enough dude as to get away with it. Yes, he has written some great material, he has an agreeable voice and an extensive taste in cover versions. He’s also written a lot of filler and chosen strange songs to interpret. All in that agreeable voice, a slightly bruised tenor. Moreover, there is the dichotomy between his live persona and his studio self. His later records suggest an acoustic troubadour, plugging in to widen his listeners palate, yet live he turns it all up to 11, chucking everything at the audience at once, good, bad and indifferent, hoping enough sticks, appearing either not really to care or to notice.

Varshons 2 is his 2nd all covers offering, following nigh on a decade after his last record, also all covers, the unsurprisingly named Varshons. It is not since 2006 that any new self-written product has appeared. At this point I would suggest there is now no difference between Evan Dando solo and the Lemonheads, any sense of band long since extinguished, the Lemonheads being Dando and whomsoever he has around him at any given time, rather than any sense of the original collective, one in which he was, astonishingly, an occasional drummer, as other members took the spotlight.

It is often suggested that covers albums are either a sign of lost inspiration, or of contractual obligation. Discounting the latter, has Dando lost his muse? And the answer is unequivocal: who knows? What is for sure is that he has always seen himself as an interpreter, covers littering his output from the beginning, most memorably with “Mrs. Robinson,” a surprise and unexpected hit. Perusal of setlist.fm, that log of live performance, reveals that he has included an astonishing 80 covers into his shows in the last year alone, far dwarfing his own catalog. If, thus, you accept this as his metier, whilst some new would be nice, this is no bad way to tide things over.

So to the record. The first thing to notice is an overall tone down of the diversity offered within the first. No G.G. Allin songs here; these are a good deal more mainstream, if still somewhat idiosyncratic. Overall the feel is a more downtempo ambience. Acousticity, if not predominant, is never far away, the mood redolent of what, in the late 1960s, might be termed soft rock. The spectre of Laurel Canyon hangs over much of the record, with the odd burst of distorted guitar soloing, often muted and low in the mix. There was a vogue for this at one time, sweet melodies with added psychedelic guitar. (I’m thinking the Carpenters and “Goodbye to Love,” with its incandescent and extracontextual guitar motif.) The one uptempo number, “TAQN” (Take a Quaalude Now) would not sound out of place on the debut by Arthur Lee’s celebrated Love, and is a joyful, if inconsequential, romp, following which it sounds Dando and band took said advice for the rest of the disc.

Of the better known songs, the much covered “Speed of the Sound of Loneliness” is a highlight, a straight coffee house near solo setting that makes the most both of the song and his vocal. Lucinda Williams’ “Abandoned” gets similar treatment, if with a fuller accompaniment, Dando wringing out the pathos, as if the song were written for him. “Straight to You” had me initially wondering as to it having come from the pen of Leonard Cohen, something its author, Nick Cave, would surely relish, and presents a similar delight.

Of the groundswell of lesser known material, Jayhawks and Paul Westerberg songs are covered competently and, well, just how you might the Lemonheads might sound. Indeed, they sound like Dando compositions. Sadly, the “Round Here” is by Florida Georgia Line, rather than the Counting Crows song. That I would love to hear Dando tackle. “Old Man Blank,” by the prolific UK guitar band the Bevis Frond, adds a texture of a synthesizer melody, a touch of color absent elsewhere, possibly pointing listeners to the original, something I might commend. Keyboards otherwise seldom appear, beyond a delightfully plonky piano solo in NRBQ’s “Magnet.”

Here I would like to praise the unobtrusiveness, largely, of the sidemen. Most of the heavy lifting on the guitar front seems to be either Dando himself, producer Matthew Cullen, or by grunge veteran Chris Brokaw. Looking to find who provided the elegant counterpointing bass melodies in many of the songs, it seems to have been mainly Dando himself.

There are, sadly, two real clunkers on the album, Dando goes reggae, “Unfamiliar,” from the repertoire of the equally unfamiliar GiveGoods, which works as well as many of the California soft rockers of  yore on attempting the same. Which is not at all. And, surprisingly, “Take It Easy,” a song surely divined for Dando and his slacker/stoner image. Somehow this is emasculated and annihilated; who knew the original might sound so ballsy by comparison. Held to last, the album closer, I guess it was expected, if by familiarity alone, to be a highlight. Makes it easier to skip, mind.

So, all in all, is it a good album? I would say yes, with the proviso of yes, if you like the Lemonheads, not that I can see those who don’t making the purchase. It is mildly inconsistent, but that is a near-given with Dando. Perhaps is a little less than one might expect, given the gap. And, compared to the live experience, as smoothly and richly prepared a product as one could seek. I went to see the Birmingham (UK) leg of the tour built on the back of the record, finding a way different beast. Barely a nod to the songs included on Varshons 2, with only one or two getting an airing, as he and his under-rehearsed-sounding band (which again included Chris Brokaw) slashed and burned through the Lemonheads back catalog and covers yet to be recorded, awash with feedback invited and otherwise. Sporadically superb, as in a very Byrdsy jangle through the albums “Speed of the Sound of Loneliness,” here the concert opener, and when he and Brokaw did a semi-acoustic mid set series of numbers, this was otherwise hard core fare for the class of ’92. More miss than hit, but strangely I still came away satisfied, ears ringing. It was indeed a shame about Ray!

Read more about Evan Dando in our archives.

One Response to “Review: The Lemonheads, ‘Varshons 2’”