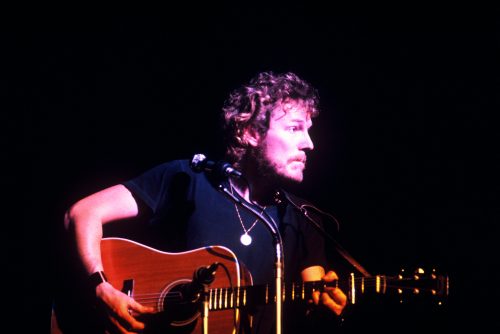 “Go ahead and change it,” said Lightfoot. Smart move on both their parts – as If You Could Read My Mind, the album went from 80,000 in sales to 650,000. Credit the now-title track, which peaked at #5 on the Billboard charts forty-eight years ago this month.

It wasn’t the first single from the album – that would be “Me and Bobby McGee,” recorded before Janis Joplin’s version. But Lightfoot’s melancholy ruminations about the end of his first marriage caught the ear of a nation ready to surf the incoming wave of confessional singer-songwriters. His song would be covered by many more, Barbra Streisand and Johnny Cash among them. But that’s not all!…

Neil Young – If You Could Read My Mind (Gordon Lightfoot cover)

Jack White had a new toy: a refurbished 1947 Voice-o-Graph booth that allowed listeners to get scratchy, authentic recordings of their own work. Neil Young was so taken with it that he recorded an entire cover album in it, 2014’s A Letter Home. His take on fellow Canadian Lightfoot’s “If You Could Read My Mind” works on a different level when given the old-timey, super-personal sound.

Viola Wills – If You Could Read My Mind (Gordon Lightfoot cover)

You’d think that if there’s one thing that “If You Could Read My Mind” isn’t, it’s a dance-floor favorite. Well, that’s not true, thanks to Viola Wills. In 1980, she took the song to #2 on the US Dance charts. Is it dated now? Sure, but it reminds us that a song’s adaptability is a good indicator of its quality.

Holly Cole – If You Could Read My Mind (Gordon Lightfoot cover)

Night was Holly Cole’s first studio album in five years. She went all over the map, covering Captain Beefheart, Elvis Presley, and a James Bond theme. Her take on “If You Could Read My Mind” closed the album. “[T]hat song’s been a mystery to me since I was a child,” she said in an interview. “Because his lyrics are so creative and so very uniquely him.” Kudos to her for making them sound like they could be hers.

Franklin Electric – If You Could Read My Mind (Gordon Lightfoot cover)

It’s interesting hearing “If You Could Read My Mind” with a full rock band sound. After years of low-key acoustic versions, it takes a minute to recalibrate. It’s worth that minute, though. Franklin Electric – like Young and Cole, natives of the Great White North – won a Juno Award nomination for Breakthrough Group of 2018, and you can hear why in their approach to Lightfoot’s classic. They respect it, but they aren’t afraid to flex a little muscle with it too.

Volkswagen has a history of choosing good songs to go with their ads (ask any Nick Drake fan). For the soundtrack to this commercial, they chose Scala and Kolacny Brothers’ cover of “If You Could Read My Mind.” The Belgian girls choir, who you may remember singing “Creep” in the trailer for The Social Network, knock it out of the park again, nailing both the pensive sadness and the sheer beauty of the song.

There’s plenty more of Gord’s gold in our archives.

2 Responses to “Five Good Covers: “If You Could Read My Mind” (Gordon Lightfoot)”