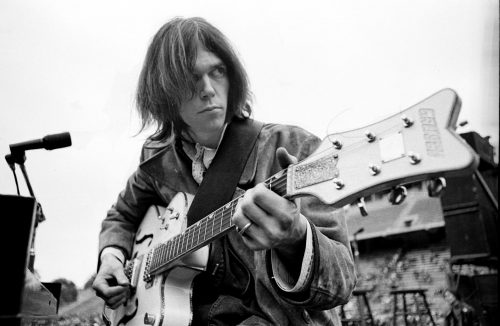 Neil hasn’t slowed down in his own age, and neither has the flow of new covers. Some of the covers below came out near 50 years ago themselves. Others only landed in the last year or two. No doubt another contender will arrive tomorrow. Neil never stops, and, thankfully, neither do covers of his songs.

The 400 Unit, Jason Isbell’s tight, powerful, and versatile backing band, has been compared to the Heartbreakers (Petty’s, not Thunders’), the E Street Band, and Crazy Horse. They have covered all three bands’ songs live, but maybe none as powerfully as their version of “Like A Hurricane,” from 2012’s Live From Alabama. Young’s influence on Isbell is so profound that he once tweeted, “But all my songs are Neil Young covers.” He sings this song as if it was his own, wailing away on guitar while Derry DeBorja’s keyboards give this version a little bit of Southern soul. More recent versions, featuring a 400 Unit expanded with an extra guitar and fiddle, are (if possible) even more intense. – Jordan Becker

In what appeared to be a relatively brief recording career in the early 2010s, British singer-songwriter Neville Skelly got compared to the 1960s folk troubadours a lot. He hardly shied away from the label, covering both Jackson C. Frank and Phil Ochs on his debut album. Expanding his range, he also dipped slightly into the 1970s with this deep cut from 1972’s Harvest. For all the Greenwich Village throwback labels, though, this cover sounds more Floyd than folk. The arrangement deftly blends slide guitar and electronic flourishes to undergird Skelly’s rich baritone. – Ray Padgett

The Indigo Girls’ cover of “Down By the River,” from their 1995 live album 1200 Curfews, could have earned a spot on this list based on the strength of the vocals alone. Emily Saliers and Amy Ray deliver haunting harmonies, recasting Young’s classic tale of love and murder with a female narrator and victim. But the song also showcases the duo’s ability to jam. On the nine-plus-minute track, the group adds two musical interludes. The first is fast, but the second starts off slow. It builds and builds to a stunning crescendo before coming to a screeching halt. When they come back in with the words “Be on my side, I’ll be on your side,” it’s enough to send you “over the rainbow” and make you thankful that there’s still several more minutes to go. – Curtis Zimmermann

From the opening chords, Cash’s version of “Heart of Gold” sounds fuller than Young’s. Maybe it’s just the recording quality, since the actual notes ride side by side with the original, but if there’s one thing Cash’s voice can do, it’s fill space. When Cash starts singing here, his voice sounds weathered with age but as powerful as ever. The harmonica is gone and a simple, bluesy acoustic solo picks out the high notes to augment the depth of his vocals. Levity and wisdom replace the looseness that accompanied the original vocals. Cash has been searching for a heart of gold and now, like an old prospector reminiscing, he’s passing on his story to those who would follow in his footsteps. – Mike Misch

I’m going to make an assertion I haven’t thought enough to really back up, but that feels true: No artist has earned better tribute albums than Neil Young. I’ve never heard a bad one, which I can’t say about any of the other obvious contenders who get so fêted as often (Bob, Bruce, John+Paul, etc). And one of the best of the best is 2008’s clumsily-titled Cinnamon Girl: Women Artists Cover Neil Young for Charity. A few numbers from its 21-song tracklist made this list, and many others came close. It largely leans Americana, but one of the hardest rockers come from 1990s pop-punk band Veruca Salt. This Buffalo Springfield cover marked their last recording, shortly before the band went on hiatus when bassist Nicole Fiorentino joined the Smashing Pumpkins. What a way to go out. – Ray Padgett

Black Label Society demonstrated that headbangers have a sensitive side with this cover of “Helpless” from their 2011 covers album The Song Remains Not the Same. Lead by metal legend Zakk Wylde, the band ditches its hard-rock veneer here to play this song as a slow piano tune. Wylde’s voice works well on the softer-edge track, which is reminiscent of many ‘80s metal power ballads minus the requisite guitar solo. A sad song that will still put a smile on your face. – Curtis Zimmermann

Neil Young showed his softer side in the song “Philadelphia”, choosing a simple piano and synth accompaniment to highlight the beautiful lyrics. Peter Gabriel chooses a similar aesthetic, though it is considerably fuller. Gorgeous strings and rising brass exude a classical style, while Gabriel keeps the vocals very straightforward and simple. In both forms, you feel the weight of the song which was written for the movie of the same name. – Angela Hughey

Well, I wonder how this came about. It very nearly didn’t, taking a full 16 years post-production to finally appear, in 1984, on a slightly dodgy compilation of old Everly outtakes, Nice Guys. It proves just how great the Brothers were, and perhaps could have been even greater had they played more often against type, as they do here. This is just immense, removing the somewhat dated garagey rock style of the original. It does no harm that the track was produced by the great Jack Nitzsche, himself no stranger to Neil Young, having also produced one of the other Young-penned Buffalo Springfield classics (“Expecting to Fly”) and then later playing in the Stray Gators, Young’s band for Harvest). Aficionados reckon they can hear Ry Cooder on the slide and mandolin. – Seuras Og

Neil Young’s 2003 environmentalism concept album Greendale was widely mocked at the time (Austin Chronicle graded it an A, as in: “Unlistenable, grade-A manure”). He’s done about 20 stranger things since then, though, so in retrospect it’s hard to remember what the big deal was. Especially when you hear this beautiful version of one of the album’s rarely-covered tracks. Stripped from the heady context, “Bandit” loses the historical baggage and becomes a Pixies-esq loud-quiet-loud monster. – Ray Padgett

41. Nils Lofgren – Only Love Can Break Your Heart

Nils Lofgren has a rock n’ roll pedigree that reads like something out of a storybook (or a darn good rockumentary). He’s played in Crazy Horse and on many of Young’s classic albums, and earned himself a spot in the Rock n’ Roll Hall of Fame as a member of the E Street Band. Plus he’s released enough solo albums to fill the rack at any hip local record store. On his 2008 album The Loner, Lofgren recorded solo guitar and piano renditions of many of Young’s greatest hits. While the whole album is worth a listen, we lean towards his piano rendition of “Only Love Can Break Your Heart” as a favorite. It’s made especially meaningful since Lofgren played piano and sang on the original recording, from Young’s 1970 masterwork After the Gold Rush. One can hear the sadness in Lofgren’s voice, singing like he’s playing in front of an intimate, late-night crowd. The track serves as a solid tribute to his former bandleader, yet he makes it his own in its quiet way. – Curtis Zimmermann

26 Responses to “The Best Neil Young Covers Ever”