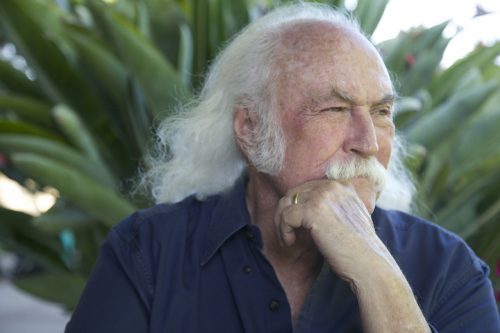 In 1969, on the advice of her manager, the folk singer Joni Mitchell opted out of playing an event dubbed “An Aquarian Exposition” in the tiny farm community of Bethel, N.Y. Had she performed, it’s possible she would have played a rain-drenched set filled with technical difficulties and tried to forget the whole thing. Instead, while watching the events unfold on TV, she was inspired to write a song that would bear the festival’s more popular name: “Woodstock.”

Mitchell released her version of the song on her March 1970 album Ladies of the Canyon. That same month, Crosby, Stills, Nash & Young, who had experienced a breakout career moment at the festival, released an electrified cover on their classic album Déjà Vu. The song would become one of the band’s signature tracks and help cement Woodstock’s place in rock history.

Crosby decided to retrace his steps on his latest album Here If You Listen by including an acoustic cover of the track. Given that the festival is approaching its 50th anniversary and all those once-naked hippies are now receiving Social Security benefits, it seems like as good a time as any to revisit the classic. “Maybe it’s the time of year or maybe it’s the time of man,” but given our uncertain political climate, this cover hardly feels like an exercise in nostalgia.

With the track, Crosby leans closer to the somber spirit of Mitchell’s original than CSNY’s harder-rocking cut. While Crosby’s voice serves as the unifying factor on the track, he allows his current bandmates Michael League, Michelle Willis and Becca Stevens plenty of room to stretch their vocal chords. When the group comes together for the chorus, “We are stardust …” it feels like they’ve discovered a sound that’s entirely new.