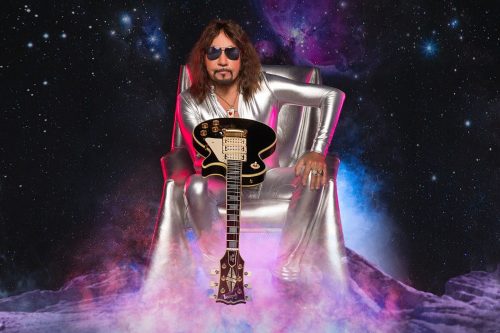 No offense to replacement guitarists Vinnie Vincent, Mark St. John, Bruce Kulick or Tommy Thayer, but certain legions of the Kiss Army believe the band lost all its creative mojo when Ace Frehley left the group in 1982 (and again in 2002). Take the Kiss tribute act Ace’s High. Its members all dress like Frehley (with costumes from different eras) and only play songs that Ace either wrote or sang on. In a documentary, one band member who models himself after Destroyer-era Ace explains the devotion. “We all just wanted to be Ace, because he was the best, the most talented and our favorite member.”

The tribute band’s seemingly limited setlist got a shot of new material in recent weeks as Frehley dropped a new album, Spaceman, named for his makeup-clad alter ego. The record is Frehley’s fourth in the last nine years. It may be the closest thing we get to an actual new Kiss album as Gene Simmons co-wrote one track and plays bass on another. Along with the originals, Frehley recorded a cover of a nostalgia-fueled anthem called “I Wanna Go Back.” The song was originally recorded by a band called Billy Satellite in 1984, but it is best known because of Eddie Money’s 1986 cover.

Frehley’s recording feels like a guitar-powered Kiss song, though a bit more ‘90s Revenge-era Kiss than ‘70s Klassic Kiss. It opens with a thunderous bit of drums and a hard-rocking guitar intro. “Eddie Money’s version is pretty much all keyboards and saxophones,” Frehley told VintageRock.com. “But mine is all guitars layered on top of each other.” The lyrics are filled with both longing for the past and acceptance that those bygone days will never return. The tune plods a bit towards the end as the chorus is repeated ad nauseum. But I guess that’s like most Kiss songs too. They’re designed to rock a stadium, not a coffee shop.

So is this cover Ace’s way of saying he wants in on Kiss’ upcoming “farewell” tour? Whether or not his former bandmates invite him to come along will probably depend more on pre-sales than anything having to do with music. Until then we’ll just have Spaceman to keep us rockin’.