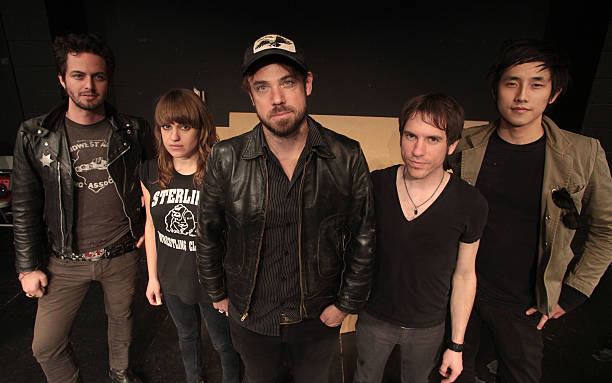 While we’re holding our collective breath and turning from cornflower to cerulean to cobalt, let’s take a look at some of the covers TATE has graced us with over their decade of playing.

Kris Kristofferson called his tale of blearily facing the morning after the night before “the song that allowed me to quit working for a living.” Jollett’s acoustic cover, recorded for Boston’s WFNX, won’t make you forget Johnny Cash’s version, but it’s not supposed to. It’s far more lonely, far more remote, and the pain it holds feels far deeper for being honestly alone, and not alone in a crowd.

For a while, TATE took cover requests on their YouTube channel and whipped up their own versions of fan faves. Here they are tackling Bruce Springsteen’s much-covered “I’m On Fire.” It’s a long way from what they would grow into, but there’s a cheery scrappiness to this cover that makes me smile.

Stephin Merritt has expressed surprise over how often “The Book of Love” is played at weddings. Considering its lugubrious pace and its use of the words “boring” and “dumb,” he may have a point. (Full disclosure, speaking as someone who used the song at my own wedding: he may not.) But I think he’d approve not only of this TATE cover, but the circumstances that prompted it. Jollett tells of his dying grandmother requesting a song, but not one of his own, and liking what he chose to sing her. She’s not alone.

TATE appeared on just a few tribute albums, but they made their appearances count, whether saluting McCartney or Muppets. Their take on Bob Dylan’s “Boots of Spanish Leather,” from the Chimes of Freedom tribute album, gives a fuller sound to his breakup ballad, and the warmth of the original is amplified as well.

TATE gives a faithful, strong reading of the first half of Q. Lazzarus’s “Goodbye Horses.” But after the second chorus, something happens. Decibel by decibel, they get louder and more powerful, like a plane taxiing down a runaway. When they hit the final lyric section, it feels like they’ve really taken off. It’s a thrilling moment, all the more so for being in a live setting.

Keep watching the skies at the Airborne Toxic Event’s webpage.