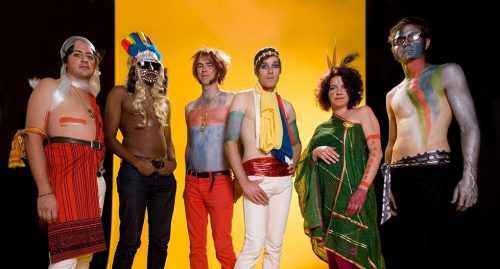 A band that’s been in business for more than two decades can be expected to change their sound a few times. With Of Montreal, though, it’s about more than sounding different. It’s about seeing the world a whole new way. Kevin Barnes founded the band, and over the years has led a score of other musicians. Together, they’ve explored worlds of folk and psychedelia, theatrical and celestial, amusement and misery. They’ve done so with such purpose that it’s become a part of what draws their fans.

Their covers are as much all over the map as the band is. They also show the same command of vision. In their covers, Barnes & etc. pull off the rare trick of exalting band, song, and music itself.

Of Montreal – Disguises (The Who cover)

The Bird Who Continues to Eat the Rabbit’s Flower finds Of Montreal in the twee-garage state of their existence. Their cover of the Who’s “Disguises” moves like a barefoot boy on a gravel-littered driveway – a little slow, a little gentle, and fairly implacable. The psychedelic breakdown in the middle hints at how much more this band had up their sleeves.

“Trouble” was Lindsey Buckingham’s highest-charting solo single, showcasing his studio wizardry (Mick Fleetwood’s drumming is a four-second loop with a few flourishes) while making magic of wariness. Of Montreal’s cover, done live on Minnesota Public Radio, is a piano-led affair that may not benefit from hours of production sorcery, but creates its very own, very special kind of enchantment.

If you’re looking for a Misfits song to cover, “Where Eagles Dare” is the go-to. Why not? That “I ain’t no goddamn son of a bitch” chorus is a catharsis to deliver. Of Montreal fell sway to the siren, but Barnes (and only Barnes) went a different way with it. He played all the instruments and turned it into a twitchy synth-pop ditty. It slipped out as a 2004 B-side, its sheer existence likely angering every Misfits fan who ever heard it.

This isn’t the first time Cover Me has covered his David Bowie love. Indeed, Barnes has never made a secret of how much of an impact Bowie had on his career. Here he reinterprets “Starman,” with a little “Hang On to Yourself” thrown in for good measure. I’m struck by the stillness of the performance – it’s as though Barnes is showing the song doesn’t need showmanship for anyone to sell it.

The night Lou Reed died, Of Montreal was playing a show in Brooklyn. Barnes announced to the crowd, “Someone I loved very much died today. Anyone with a heart and a brain loved him too.” The band then launched into a cover of “I’m Waiting for the Man” that blew the doors off the place. Nothing twee about this performance, which saw Barnes’s guitar give both his face and the stage floor a real beating.

Click here to find some of our other Of Montreal pieces.