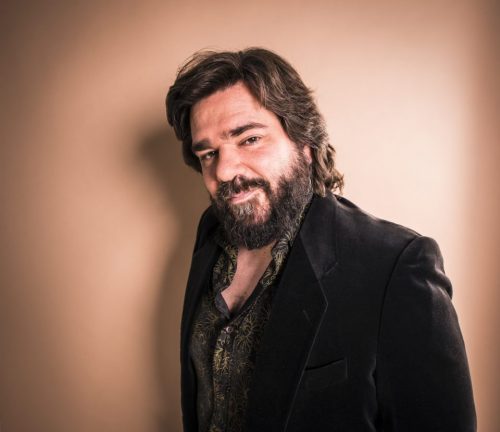 You might recognize Matt Berry from British comedies like The IT Crowd, The Mighty Boosh, and his own Toast of London. Personally, I know him from his scene-stealing appearance in Community (“You hit me! With a woman’s hand!”). But he’s also a no-joke musician, having released a half-dozen albums over the past two decades, and scoring many of his TV shows himself.

So, rather than a comedian dipping a toe into music as a lark (or “brand extension”), Berry may be the perfect person to record an album called Television Themes. The content is exactly as advertised; more specifically, he’s covering British TV themes from the ’60s, ’70s, and ’80s. Though beloved in their day, many of the theme songs became pretty obscure in subsequent decades, having never been properly released. While some of the shows I know (Dr Who, Top of the Pops), I admit I don’t even recognize half these names. Blankety Blank? The Liver Birds?

“It’s a covers album, just an appreciation of a time when the signature tune and title sequence were both important elements within the overall theme, atmosphere and tone of a television show,” he writes in the press release. “I’ve always loved these now lost, rare and in some cases forgotten themes so, as with everything I do artistically, I set out to please myself and capture these gems as best as I could and make them available on vinyl, some possibly for the first time?”

The first single is the theme to Are You Being Served?, a show I always confuse with Fawlty Towers due to watching PBS reruns of both as a kid. I didn’t remember the theme song, but Berry’s cover is a fun jazz-soul groove complete with cash-register sound effects (the show took place in a department store). Listen below, then pre-order the album on Acid Jazz Records.

I’ve embedded the show’s original title sequence too – see if his version syncs up.