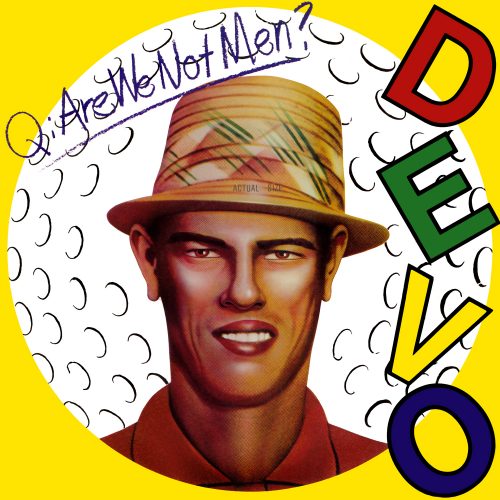 As Mark Mothersbaugh and Gerald Casale told me when I wrote about their “Satisfaction” cover for my book (you can still read an excerpt of that chapter at The New Yorker), even completing the album became a monumental pain. Having Brian Eno produce your debut record would seem a coup, but sessions quickly became fractious. Devo wanted to record the album with zero studio experimentation. They’d honed the songs over several years of concerts and rehearsals, and saw no reason to change them. Eno did not go for that approach, sneaking into the studio with his pal David Bowie after the band left and adding new instruments at least once. The next morning, Devo caught on and wiped them. Devo’s instincts have rarely led them astray, but boy I’d be curious to hear what Bowie was trying to add to the tracks.

We do know, though, what many other people added. All of the songs have been covered at least once, and a few have been covered many, many times (“Mongoloid,” “Uncontrollable Urge”). In one case where we couldn’t find a decent cover of a deep cut, we commissioned a brand-new one – which premieres below. So let’s celebrate one of the weirdest bands to ever have pop hits with covers of every track off their instant-classic debut.

Weird Al didn’t parody Devo on his second album. He did them one better: he wrote his own song, in the style of Devo. “Dare to Be Stupid” offered a note-perfect homage to brothers Mothersbaugh, brothers Casale, and Alan Myer. So when Al began covering a different song every night on his recent summer tour, “Uncontrollable Urge” was the least surprising of the bunch (on the three shows I caught, he did “Smoke on the Water,” “Close to You,” and “Cinnamon Girl”). And, once again: note-perfect. There’s better audio quality on Stitcher, but the video is a treat to watch. Now when will Devo cover “Dare to Be Stupid”?

Deer Tick – (I Can’t Get No) Satisfaction

Two tracks in and we hit the trickiest question about these lists: What do you do when the album track is already a cover? Rhode Island rapscallions Deer Tick come to our rescue in this case, having covered the entirety of this very album on one raucous night in 2014. Luckily, NYCTaper captured the newly-christened “Deervo” covering the cover. (PS: Last plug, read my interview with Mark Mothersbaugh and Gerald Casale about this song).

By the time this album came out, Devo sounded, in their own way, polished. Eno producing will have that effect, no matter how much they resist. But only months earlier, they had still been a band practicing in an unheated Akron car wash. I imagine his ragged and garage-y cover is what they might have sounded like then.

I couldn’t find a good cover of “Space Junk” for this post, so musician Jim Laczkowski was kind enough to create one. And he went above and beyond, delivering a wonderfully spaced-out synthy cover (and check out that album art). He says: “My first experience of this band may have actually been through Weird Al’s brilliant pastiche ‘Dare To Be Stupid,’ nevertheless it was a gateway track that lead me to discover a beautifully realized enigma of a band. I’ve been a Devo fan based off of this record as well as a greatest hits collection I picked up on cassette at my local library in high school. I never dug too deep into the lyrics of ‘Space Junk’ until approaching this cover when I realized how dark of a song it actually is, tapping into ‘sky is falling’ paranoia and unexpected sudden loss. The one thing that impressed me the most was the choice to go from a major key to a minor once the guitar solo kicks in. For me, I decided not to pick up a guitar and mainly try my own take on The Cars with the synth stepping in for the guitar solo. I thought of the opening as ‘Drive’ and then it gets a little bit more spacey and sparse. Devo is a great band and this record remains their best.”

Took me ages to track this down. It’s by a Cleveland bluegrass band called the Hotfoot Quartet, whose first release was this 7″ “Mongoloid” cover in 1979. This flashy-pickin’ bluegrass band tried their hand at novelty punk covers two decades before Hayseed Dixie made a career of doing the same.

Even if you hate this – and you very well might – you gotta admit it’s clever. For a 1979 all-fan tribute album KROQ radio put together, some group calling themselves Lonnie & The Devotions created a doo-wop take on “Jocko Homo.” It’s warped doo-wop though, the sort Frank Zappa would occasionally delve into, like watching a production of Grease in the Upside Down.

Fight Amp – Too Much Paranoias

The original “Too Much Paranoias” doesn’t even reach two minutes; needless to say, it’s not the most-covered song here. But I eventually dug up two I liked. The honorable mention goes to Indiana art-rockers Stationary Odyssey, who somehow make the song even shorter on a weird vocal loop that only includes a few of the actual lyrics. But I’ll go with Fight Amp’s blast of heavy-as-hell metal. Their “Too Much Paranoias” certainly sounds paranoid. But I love the crazy guitar-squall breakdown, and the riff and pounding toms that bring the song back to something resembling sanity. “Jesus, this is brutal,” writes a YouTube commenter. In this context, I think he means it as a compliment.

More famous groups have busted this one out live: Wilco, Ty Segall, and Liam Finn among them. They’re surely fun to experience live, but for me the best to listen to at home comes from lesser-known French indie-tronica duo The Penelopes. It’s thudding and loud, adding a little Nine Inch Nails industrial menace without losing the yell-along energy. One of Devo’s musical peers apparently approves of this French duo too: this summer, The Cure’s Robert Smith personally tapped them to play his festival.

We posted Five Good Covers of this song back in 2014. They’re all good (hence the name), but the best visual experience unquestionably came from Deborah Harry. For her 1981 Saturday Night Live appearance (as both host and musical guest), she performs am inexplicable cover alongside Blondie bandmates Chris Stein and Clem Burke. One misses these weirdo SNL performances form the early days. Why did she perform this song? She wasn’t promoting a new single – she never even recorded this song. Sometimes, dressing up as a cowboy-octopus to cover Devo once can itself be the end.

Will Toledo and his band have covered everyone from Leonard Cohen to Death Grips live recently. A few bands they keep returning to, though: David Bowie, Frank Ocean, and Devo. They’ve covered “Uncontrollable Urge” a handful of times themselves, but the real treat is their roaring version of relative obscurity “Sloppy (I Saw My Baby Gettin’).” This particular video comes from 2017’s Shaky Knees festival, but there’s also good audio from Coachella a few months prior where they start with “We don’t really know how to play this song…”

Ska bands covering Devo might be some people’s idea of a musical nightmare. If you’ve made it this far, you’re probably not one of them. Good thing, because 1997 Mashin’ Potatoes tribute album (is that a Skankin’ Pickles pun?) offers 15 such oddities. And the mostly forgotten group Gangster Fun apparently know their spud stuff, digging way deep to cover a song almost no one covers.

Don’t own this masterpiece yet? Get the original album on Amazon.