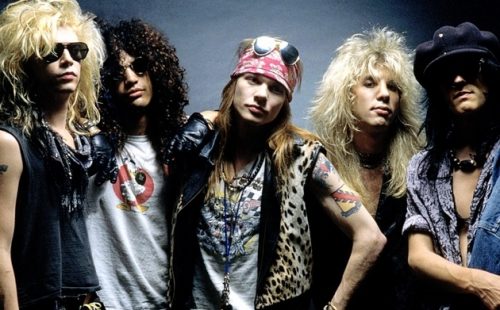 In the ‘50s when Elvis Presley shook his pelvis and sang his rowdy brand of rock n’ roll, America exploded. Kids loved it, parents hated it, religious nuts denounced it and racists accused him of infecting white America with black culture.

By the late ’80s, he was practically considered wholesome, harmless entertainment when Guns N’ Roses came along. They were loud, dirty, drunken buffoons, who dressed like slobs and played fast, dirty, misogynistic music. The MTV generation went wild, while their parents, who grew up on Elvis, naturally freaked. One of my fifth-grade classmates’ moms actually mailed copies of the group’s lyrics around to all of our parents warning them of the music’s dangers.

So with this in mind it’s somehow fitting that the Gunners covered Elvis’ breakout single “Heartbreak Hotel” in 1986 before they were rock stars. The studio version finally gets an official release as part of a deluxe reissue of the band’s masterwork Appetite For Destruction. With cranked up dueling guitars and Axl Rose’s trademark screams, they play the song louder and faster than Elvis ever did. Axl even tweaks the lyrics, adding a word the King never would have said in front of his Mama. Listening to this cover in 2018 is like hearing a time capsule of everything the band was in the ‘80s.