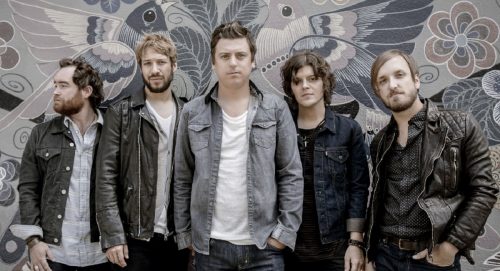 For a lot of us, a good cover song starts and stops with the careful curation of the song itself. And when done right, when the artist covering the song puts their entire body and soul into the delivery, it’s almost as if you have entered into a way-back machine taking you back to another time, another place, another band. With The Wild Feathers version of “Neon Moon,” they have hit the cover song sweet spot.

The third single from then up and coming country duo Brooks and Dunn, “Neon Moon” was third number-one hit from their debut album Brand New Man. Here, as part of the YouTube Truckstop Series, younger country-rock quintet The Wild Feathers offer up a version that rides pretty much down the center of the highway, which is not a bad thing. Given the vibes coming from the confines of the camper van the band used to record this song, there clearly is a lot of band-love for Brooks and Dunn and “Neon Moon.” The song itself is the late night honky honk lament sort of tune that seems to be a great fit for the band to cover especially given that their upcoming June 29th album release is titled Greetings From The Neon Frontier.

For extra Wild Feathers cover song credit make sure to check their cover of The Faces “Ooh La La” that was from the same Truckstop Series recording session.