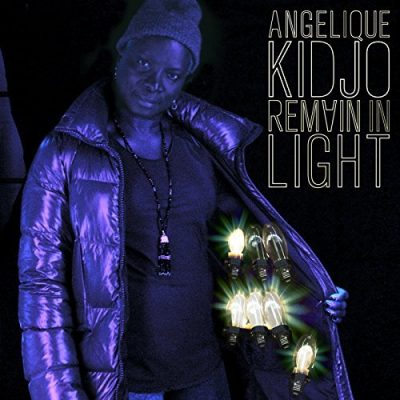 This will not be that review.

Listening and reading this week, I found that it was Kidjo herself who complicated my understanding of Remain in Light as plundered art. Kidjo insists that those of us who talk about cultural exchange misuse “cultural appropriation” to conflate two very different concepts. She differentiates between cultural expression – in which an outside artist gives credit to the artists and thinkers who inspire them while writing new things – and good old-fashioned thievery that passes cultural artifacts off wholesale as one’s own. Her take on Remain in Light, in other words, is not an indictment of its creation or use of Africana. Though, in so many ways, her song-by-song cover does transcend the original, it never demeans it or critiques it for existing. In many ways, Kidjo’s cover exults the original and honors its skittering heart, drawing attention to all of the ways that Brian Eno and Talking Heads use polyrhythms to forcefully re-inhabit the embodied world that Byrne’s paranoid, stream-of-consciousness lyrics are never shy about leaving behind.

Kidjo’s joyful album is itself an act of what she would call cultural expression; contrary to my expectations, she doesn’t restore these songs to the soundscape of their influences so much as she is inspired to take things from the world Byrne described in 1980 and apply them to the world she sees in 2018 – one that includes Africa and her native Benin, of course, but makes room for Donald Trump as well. While the album does offer a clear alternative to the original, it is a crass oversimplification to suggest that such a response is simply more African. If her Remain in Light offers some kind of course correction for this album, it boils down to a much more surprising adjective: optimistic. While her covers keep the paranoia and anxiety of the original intact, lyrics that, again and again, were sung in such a way that they succumbed to alienation induced by midlife and out-of-context “facts,” now offer a pervasive hope for a more resistant and actualized notion of the self in a global context. This new context includes communication technologies such as Twitter and Facebook that, while vexing and often illustrative of the disembodied fear beneath Byrne’s musings and character sketches, also offer the potentiality of virtual nation building and activism.

Like a lot of people, the week in which I was preparing to review this album found me watching episode after episode of Parts Unknown, both because of Anthony Bourdain’s passing and because of the unfortunate coincidence that Netflix is taking the show off of its streaming service in a few days. Somehow, I hadn’t really spent time with the show until all of the fabulous eulogies for Bourdain inspired me to a sob-inducing binge. I don’t know that I’ve seen the medium of documentary work more fully to preserve difference while contemplating all of the complexity of globalization, including the mixed bag of things like open borders, tourist dollars, and even the presence of a Western film crew responsible for the footage one is watching. The key to the show – and perhaps a key to disambiguating cultural inspiration from theft – is as simple as the unwavering, fully comprehending way that Bourdain looks at each and every person with whom he talks and (especially) shares a meal. Every interview and impossibly delicious looking bite is a moment of shared recognition; Bourdain’s eyes reveal how fully he is comprehending differences, similarities, and the fleeting moment of time in which the utterly human interaction is happening. I’m not sure which episode I was watching when I realized that it’s not the African polyrhythms that make Remain in Light so special; the album is guided by the same recognition of humanity that drives Parts Unknown. Recognition, this time of the original album, is also responsible for Kidjo’s equally special response.

Perhaps even more immediate than the aspect of cultural exchange that dominates reviews of this album, including my own, is that of temporal exchange. These songs repurpose Reagan-era anxiety and paranoia for the Trump era. Where Talking Heads use a lot of artificial sounds to get at the alienation of the individual during the years where it was possible to perceive knowledge being replaced with information, Kidjo and her assembled group of musicians – including Fela Kuti drummer Tony Allen and Vampire Weekend’s Ezra Koenig – use horns and choirs to make her album sound much more like a first take that could be happening right in front of you. Still jumpy and anxious, the songs cease to be alienated. They are here and now, visceral and alive. The presence that permeates the album locates Byrne’s observations firmly in Kidjo’s body; her presence is everywhere here, from the cover of the album cover – where she appears ready to sell you stolen or found objects from inside her coat – to her booming, growling voice.

Byrne’s lyrics focus on bodies: the hands in “Born Under Punches,” the man obsessing about faces in “Seen and Unseen,” and the woman whose hips hold the world, moving as if by remote control in “The Great Curve.” These bodies never feel like Byrne’s. His mumbling and braying and muttering suggests that his consciousness exists in relationship to the material world the way a voice-over occupies a movie. When Kidjo tells us to “look at these hands,” I see her own, holding a microphone, performing in a night club I can almost smell. This shift illustrates the difference that feels right for my own sense of these two, different moments in history. My memories of Regan-era anxiety are cognitive. I thought the world was in chaos. This time, I know it in my gut. However, I also know that others are feeling it too.

Kidjo’s renditions of these songs don’t simply add instrumentation and presence: they add voices. Even when the original Remain in Light swells to a polyrhythmic crescendo, it is not particularly polyphonic. Kidjo adds choirs, sure, but also snippets of African stories and songs in Yoruba and Fon, languages spoken in Benin. Perhaps obviously, this draws attention to ways in which today’s political anxieties are more self-consciously global than yesterday’s, but it also serves to remind us that personal and cultural anxiety are not inherently modern concepts. The use of Yoruba and Fon also remind us, all the way through, that English is not Kidjo’s native language. This doesn’t matter, exactly, but it draws attention to her cadence and emphasis, elements that change the meaning of Byrne’s lyrics and demand that we hear each and every word anew.

There are dozens of micro-essays to be written analyzing the affect of single lines here, but I’ll just choose one song. In the litany of questions you may ask yourself in “Once in a Lifetime,” Byrne stresses the word ask, cataloging moments of clarity or crisis of the self. Kidjo stresses you and yourself, making the act of questioning more universal and omnipresent. Likewise, she stresses adjectives – “where is my LARGE automobile” and “this is not my BEAUTIFUL wife” – repurposing Byrne’s disassociation as a crisis of plenty. Finally, she punches the final word in the question “where does this highway go to?” The suggestion that the highway goes somewhere makes her version of the song defiant and euphoric. The conclusion that things are “same as it ever was” is recognizing much of the same things that drove Byrne to distraction almost forty years ago. This, time, though, that notion is much more comforting.

This affirmation comes through most clearly in Kidjo’s retelling of the stories set to music in “Listening Wind” and “Seen and Unseen.” Perhaps obviously, her presence lends gravity and credibility to the former’s tale of one person’s response to the occupation of their village by foreigners “in fancy houses.” The song’s chorus and its “wind in my heart” feels very differently blowing in Kidjo’s Beninese heart than it did in Byrne’s Scottish-American one: the wind that blows through Kidjo’s heart is the same as the wind that the song’s character feels, where Byrne’s was a reaction to recognizing it as human and valid while being positioned as one of the Americans who could have received the dangerous package. Here, Byrne’s recognition is replaced by Kidjo’s bearing witness. It’s mournful but also, simply by being sung by her, redeemed. In “Seen and Unseen,” Byrne’s story about a man brought by the modern world to a dysmorphic desire to reshape his face by thinking about it is, in Kidjo’s hands, a story about the global opportunities made possible by the cultural inspiration she believes in and demonstrates.

Song after song manages to find authentic joy and hope without denying any of the anxiety of the original. Where Byrne’s “walking the line” in “Houses in Motion” smacked of desperation and futility, Kidjo’s no less frantic visitation of Houses carries the implication of bringing comfort and human contact. “Once in a Lifetime” finds Kidjo consciously “letting the days go by” while Byrne tried in vain to clutch them in his hands. Finally, in the albums’ respective closing songs, the grim (and non-polyrhythmic) instrumentation of “The Overload” is half as long and replaced with bass and choir. Lyrics noting that the center is no longer there, delivered in a way that is too overwhelmed to be bothered, are now forcefully rendered. Where Remain in Light is ultimately a song cycle that ends in the overload of the individual, Kidjo’s Remain in Light triumphantly suggests that if we experience all of that together, recognizing that we are, it is the system itself that might be overloaded.

Angelique Kidjo’s Remain in Light is available on Amazon, as is Talking Heads‘.

One Response to “Review: Angélique Kidjo, ‘Remain in Light’”