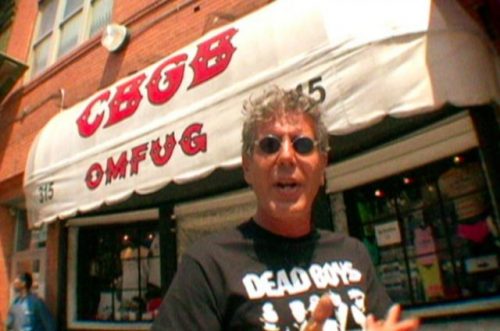 So we’re going to pay tribute the only way we know how: With covers of Bourdain’s favorite songs. Which we know from playlists he made over the years for Rolling Stone and KCRW. We hope he would have liked these covers of the soundtrack to his life.

Judging by that photo above, Anthony would certainly approve of this one. At 2006’s closing night of the old CBGB, Patti Smith roared into a one-time-only cover of the Dead Boys’ most enduring song. It snarls and spits as hard as the original, with bonus Lenny Kaye guitar freakout.
Anthony said of the original:
“It doesn’t get any angrier. The name of the album was Young, Loud & Snotty, and they delivered on that promise. It’s one of the most pure punk albums, I think, ever recorded and a classic punk song. The musicianship is not the best, they were really one of the ugliest band to ever walk a stage. But in that sense, it really encapsulated punk at its lowest and best.” (KCRW)

One of the deepest of Sonic Youth deep cuts, their Kim Gordon-led “Personality Crisis cover was first released on a write-in offer 7” in a 1990 issue of Sassy Magazine. It got wider release three years later – though not by much! – on the Australian tour promo EP Whores Moaning. I imagine the 61,000 people who have played the YouTube is several times who heard it back in the day. Thank goodness for the internet!
Anthony said of the original:
“An answered prayer. The antidote to all the lousy music of the era. Loud, unapologetically sloppy. Johnny Thunders guitar made life worth living again and gave permission to everything good that followed, like New York punk. Joyously nihilistic.” (Rolling Stone)

Bourdain adored San Francisco garage band Brian Jonestown Massacre; of the 14 songs in an iTunes playlist he made, six are by them. His favorite track gets here covered by Sune Rose Wagner of The Raveonettes. The Raveonettes have many of the same influences as the Massacre, from psychedelic rock and garage, but in their case it gets filtered through a shoegaze-girl-group haze. No girls in this case, since it’s him solo, but the shadow lingers.
Anthony said of the original:
“Drenched in opiates and regret, I heard this song once and became besotted by it. It sounds like lost love, past lives, unforgiven mistakes and transgressions.” (Rolling Stone)

Suicide – 96 Tears (? and the Mysterious cover)

It’s funny that Bourdain loved the original version, since Suicide’s cover actually seems way more in his world. I won’t say more; we’ve got a Best Covers of 1978 post next week and you better believe this is on it…
Anthony said of the original:
“Even at age 10, I responded right away to that. Cheesy, evil, roller-rink organ…it laid out for me the possibility for darkness in an otherwise happy landscape of AM radio pop music. This was a very sinister-looking band — Question Mark, had sort of a Ramone-like bowl haircut and wraparound shades. It’s essentially a very angry song about revenge.” (KCRW)

No secret why Anthony related this song; he says so himself below! Admittedly, getting someone more enthusiastic about heroin doesn’t exactly seem like a point in the song’s favor. Though, to be fair, how did lyrics like these possibly make smack seem like a good idea: “The plaster fallin’ of the wall / My girlfriend cryin’ in the shower stall / It’s hot as a bitch / I should’ve been rich / But I’m just diggin’ a Chinese ditch”
Anthony said of the original:
“My early honeymoon period with heroin; this song made an otherwise ill-considered lifestyle option seem like a good idea.” (Rolling Stone)

One Response to “Covers of Anthony Bourdain’s Favorite Punk Songs”