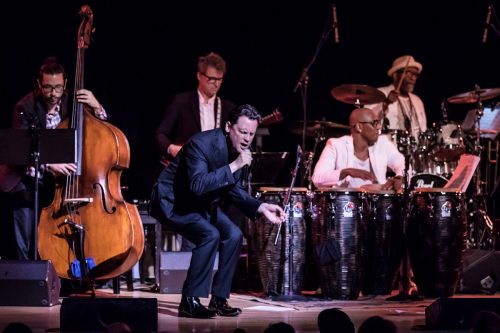 Last Friday, I posted a few videos from last week’s Town Hall tribute to Bob Dylan’s 1963 concert at the same venue. I included Bill Murray, Steve Buscemi, Geoff Muldaur, Emily Haines, and Bob Neuwirth’s performances, and promised I’d add more videos as they landed. Well, they never landed. But we’ve got the next-best thing: a bootleg audio recording of the full concert. It includes beautiful covers of songs Bob performed at that 1963 concert by the Milk Carton Kids, Laurie Anderson, Mark Kozelek, and many more. And we’ll get to them…but first we have to talk about the dog in the room.

For reasons either inspired or inexplicable, superproducer Hal Wilner drafted Robert Smigel’s Triumph the Insult Comic Dog to cover “Peggy-O.” And I thought Bill Murray was an odd choice! Backed by the Milk Carton Kids, Triumph makes the barest attempt to sing the song, before launching into a typically raunchy and irreverent comedy routine (one he claims Bob told back in 1963). Listen to it below. Unfortunately the bootleg’s audio quality is lowest on this song, since the laughs are louder than the jokes. Though how high-fidelity do you really need your Triumph audio?

Okay, now let’s get to the real covers. And there were some great ones! Many artists fronted the Steven Bernstein-led house band (featuring Wilco’s Nels Cline on guitar). Joan As Police Woman delivered a stunning “Tomorrow Is a Long Time,” vying Elvis’s version for the greatest cover of that song. Sun Kil Moon’s Mark Kozelek, who so often covers songs on solo guitar, clearly enjoyed his moment as a big-band leader (as evidenced by the picture above) roaring through “Who Killed Davey Moore” and a ten-plus minute “With God on Our Side.”

Some musicians took the big band in less big-band directions. Laurie Anderson near-recited the rarely-covered “Talkin’ New York,” in the same way we already saw Buscemi tackle “Talkin’ John Birch Paranoid Blues.” They do have “Talkin” right there in the titles, after all. Terry Adams took “Highway 51” as a New Orleans rave-up. Most surprising as all might be Greg Tate’s free-jazz version of “Seven Curses,” more Gil-Scott Heron than Bob Dylan.

One of the evening’s most magical performances, though, eschewed the house band entirely. The Milk Carton Kids tackled one of the concert’s rare hits, “Blowing in the Wind.” And oft-covered song, to put it lightly, but rarely harmonized as beautifully.

Download the full concert recording here, with thanks to taper “Blue Chair”. We can hope that they’ll release a proper recording eventually, but this will have to do for now. See the full setlist below.