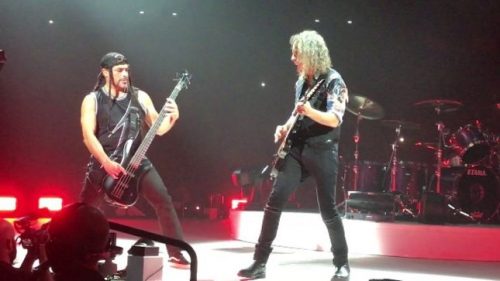 As time has moved on and the ripped-jeans-and-denim-jacket-wearing metal gods have morphed into middle-aged landed gentry with giant art collections and horse farms, we know that this image was all just one big lie. It was spoon-fed to us through MTV’s Headbangers Ball and RIP magazine to sell cassettes and expensive $20 concert tickets. If we needed more proof that this era is long gone, all you need to do is turn to Metallica’s YouTube page. The group has posted clips of guitarist Kirk Hammett (who, like Katy Perry, is now a blonde) and bassist Robert Trujillo performing Europe’s cheesy metal classic in Sweden, along with some other geographically appropriate covers.

Trigger Warning: If the thought of Metallica performing the ultimate in hair metal cover offends you, I recommend you stop reading right now!

The covers come during a portion of the show called “Rob & Kirk Doodle,” giving Lars and James a breather. The song choices appear to have been geographically strategic to appeal to the hometown crowds. While in Germany in April, they did a metal-appropriate version of Accept’s “Balls to the Wall.” But in Stockholm, instead of paying homage to the region’s Black Metal tradition, they performed “The Final Countdown” along with ABBA’s “Dancing Queen.” Yes, you read that right, Metallica is now covering ABBA. Elsewhere, in Norway, they pumped out a rendition of the Norwegian group A-ha’s “Take On Me.”

The end result of all this cover madness is, well, actually kind of fun. Hammett and Trujillo appear to be having a blast. To be fair, they’re probably really sick of playing “Master of Puppets” anyway. They do an expert job of reworking the famous keyboard riffs on the guitar and bass. Trujillo’s voice is a bit rough around the edges. He does okay with A-ha, but struggles a bit to emulate Europe’s Joey Tempest and the siren calls of Agnetha Fältskog and Anni-Frid Lyngstad (it’s not like he’s auditioning for Mamma Mia).

If this was 1986, one could picture the long-haired fans in the classic documentary Heavy Metal Parking Lot burning the place down in disgust. But it’s 2018 and aging metalheads appear to have developed a sense of humor, as you can see them singing along and filming with their phones. Maybe they needed a break from all the metal madness too. Still the whole thing forces us to ask with absolutely no sense of irony: when will Metallica be adding Barry Manilow covers to their setlist?