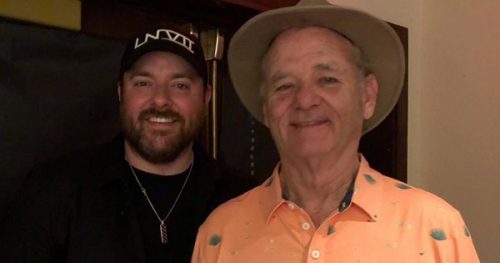 Originally recorded by Marty Robbins in 1959 on his Gunfighter Ballads and Trail Songs album, the song “El Paso” just might be the quintessential country and western ballad. Winning a Grammy for Best Country & Western song in 1961, there have been a lot of excellent cover versions over the years, including a relatively recent live version recorded at the Spotify studios by Shovels & Rope, an amped up rendition by The Old 97’s that was featured on a King of the Hill soundtrack, and Tom Russell, someone that has spent a lot of time in El Paso, lends a passionate voice to the song on his record Indians, Cowboys, Horses, Dogs.

And then, there is this version to add to the canon courtesy of country singer Chris Young and comedian, actor, bon vivant Bill Murray. Yes, that Bill Murray.  The pair shared the stage at the annual Caddy Shack Charity Golf Tournament that takes place in St. Augustine, Florida. Playing it straight – straight for Bill Murray, that is – the performance and accompanying YouTube video is a real treat to watch. With Murray jumping into the song with plenty of gusto,  Young has the lyrics at the ready providing an assist with his cell phone. But, with his typical flair, Murray doesn’t seem to need the help from his caddy as he delivers a performance that Chris Young and the crowd lucky enough to be there will remember.

Check out more Bill Murray-related covers (and yes, there are more) here.