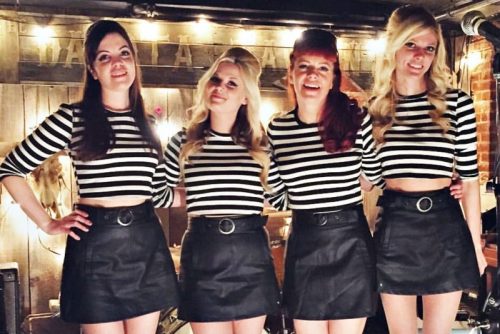 Fresh off an ear-popping set at the Asbury Park Surf Music festival where they shared a bill with Dick Dale and Los Straight Jackets, this band seems to be intentionally flying just under the radar. No vocals, just psychedelic instrumental surf music played straight, fast, and furious.

With a limited digital footprint that so far includes only a three-song self-titled E.P. that features the singles  “Cha Cha Heels,” “Mrs. Moto” and “Undercover Secretary” it is a bit ear-scratching that the band would cover a Britney Spears song. But they do, and it is really cool. Their cover of “Toxic”, a song from Brit’s In the Zone L.P., is only barely recognizable by the most ardent of Britney fans, but that is ok. The Austin Powers by way of The Flintstones vibe makes this one a time warp well worth experiencing.

Check out more Britney Spears cover here, including The Ten Best Britney Spears Covers You’ve (Probably) Never Heard and our recent tribute to “Hold It Against Me.”