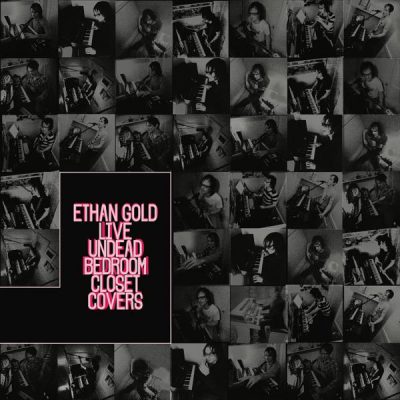 When Ethan Gold began recording cover songs in his bedroom closet, they were more than his tributes to artists that mattered to him – they were therapy. Gold had sustained a head injury in a warehouse accident that left him unable to speak, let alone do the complex sound engineering his work required. He had also just been forced to leave the condemned residence that inspired his previous album, Songs from a Toxic Apartment. So these covers, one-take performances filmed for YouTube, were Gold’s road to recovery. Now they’ve been compiled and released as a digital-only album, Live Undead Bedroom Closet Covers, and it’s a pleasure to see that his recovery is complete.

One of the fun parts of the original YouTube videos (watch a few in our earlier piece on Gold) was watching Gold putting together his various loops and musical passages. That is of course missing in the audio release, but the level of enjoyment is still present – compare it to watching the chef in action versus sitting at the dining table. What Gold serves up is excellent even if you don’t know how he did it.

The covers range from quite faithful – “Age of Consent” sounds like it could be a New Order demo – to drastically altered. “I Am a Pilgrim” has none of the Byrds’ melodicism; instead, Gold plays a dissonant chord, vocals so heavily echoed as to be almost impenetrable, and cuts it all off short of a minute. He also proves adept at uniting disparate influences, with his medley of Empire of the Sun’s “Walking on a Dream” and Tom Petty’s “Learning to Fly.” The songs share a chord progression and a message of hope, and Gold brings them together like the long-lost twins they never knew they were.

The one-man-band approach means that LUBCC has an electro-synth sheen over most of it, which makes the acoustic performance of “Bela Lugosi’s Dead” that much more welcome, a flash of humanity that soothes even as it sears (Gold’s vocal and its rush of pain is especially strong). The song gets an encore of sorts in “Bela Lugosi’s FunMachine is Undead,” sounding for all the world like background chase music in a video game.

LUBCC has the feel of Gold cleaning out his (bedroom) closet; it’s the work of an artist who’s proven to himself as much as others what he’s capable of, and who’s ready for the next challenge. Considering what Gold had to go through to reach that point, one can’t begrudge him the sense of closure he’s earned, and it’s going to be good to see what’s he’ll move on to now that he’s opened that closet door and, as he compellingly sings in his cover of the Hair classic “The Flesh Failures,” let the sunshine in.