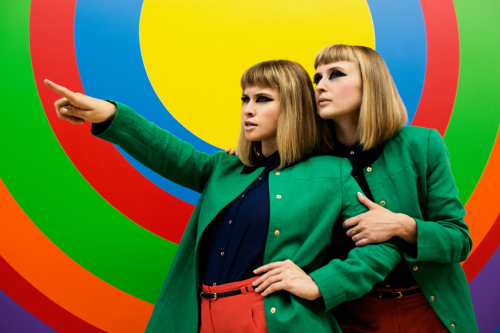 For many, the starting point for a good cover is the quality of the original song itself. And, Gerry Rafferty’s “Right Down the Line” teaches a masterclass in how to write a killer pop song. Released in the summer of 1978 and included on Rafferty’s first post-Stealer’s Wheel release Baker Street , the song reached number 12 on the Billboard chart and was generally considered to be the less-cool younger brother to the massive hit that was the title track.

In my opinion, there have only been a few covers of the song worthy of consideration, most notably the Bonnie Raitt version of the song on Slipstream. The relative paucity of great versions only makes Lucius’s new acoustic rendition of the tune on their latest release, NUDES, all the more special. The Brooklyn duo is no stranger to highly eclectic cover songs having included Bowie’s “Let’s Dance” on the deluxe edition of their 2017 release Good Grief, and crooned their way through “Everybody Wants to Rule the World” on their freshman release, Wildewoman.

The NUDES album itself is actually a collection of cover songs and recordings the band has had in the well over the last couple of years. Recorded mostly at the famed Electric Lady Studios during a break in Us + Them tour where Lucius band members Holly Laessig and Jess Wolfe are twenty feet from stardom as backup singers for Roger Waters and his band. To sweeten the cover song pot, the album also includes a version of Tame Impala’s “Eventually” as well as the made famous by Leadbelly traditional tune “Goodnight,Irene” with an assist from Waters himself.