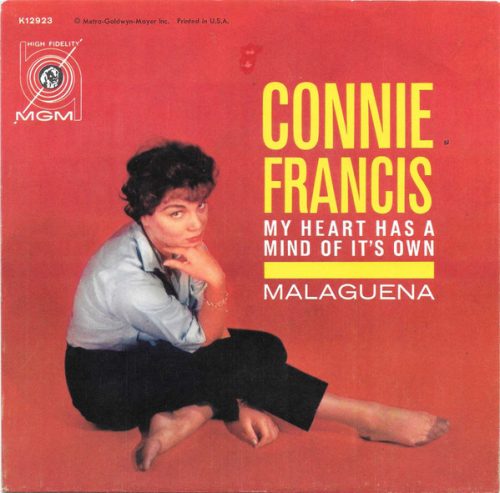 Our grandparents like to tell us how much simpler things were in 1960: A world without an internet or mobile phones to navigate, steady 9-to-5 jobs, and a soundtrack of wholesome, reassuring music. Listen to “El Paso” by Marty Robbins or Brian Hyland’s deathless “Itsy Bitsy Teenie Weenie Yellow Polka Dot Bikini” and you may feel like you’re stuck in a soft-focus time warp. (Of course, you may find that to be a pleasant feeling; no judgements here.)

But some songs from that era exhibit real staying power, whether through repeated airplay or, more often, subsequent artists’ cover versions. One of these is Connie Francis’ “My Heart Has a Mind of Its Own,” which gave the New Jersey-born singer her second #1 hit on the Billboard Top 100 on September 26, 1960.

At first blush, “My Heart…” might sound like more period-piece pap: A shuffling two-beat rhythm gives it a slightly countrified feel, while the mournful sax lends it a stereotypical, vaguely “Mexican” flavor. Even the spiky guitar line – a later overdub, along with that tremulous sax –
is a perfect artifact of those innocent, pre-psychedelic days of the early ‘60s.

But its unadventurous arrangement aside, “My Heart…” is a subtly bewitching tune, and Francis, then all of 22 years old, was hardly a run-of-the-mill singer. Her impassioned delivery gave the ballad an immediacy and resonance, not to mention the second of her three #1 hits.

Though Connie Francis would be absent from the pop charts by 1967, “My Heart…” would have an afterlife of its own, first, oddly enough, with another Connie. Connie Smith gave the song a fairly conventional country treatment – pedal steel, tinkly piano – on her 1966 album Downtown Country.

Though Connie the Second’s version failed to trouble the charts, Susan Raye’s remake hit pay dirt, reaching #10 on the Billboard Country Chart in 1972. Perhaps crucially, it reinstated the plangent vocal harmonies of the original version

A few years later, Debby Boone would take the song to #11 on the Country Chart, despite a slick and somewhat unfortunate treatment. And finally – at least for our investigative purposes – a young Reba McIntire tracked a rather more compelling take on the song for her 1994 Oklahoma Girl album.

All in all, not a bad run for a fairly conventional ballad. Perhaps the current generation of country (or pop) artists will give “My Heart…” yet another spin. Bebe Rexha, can you hear me calling?