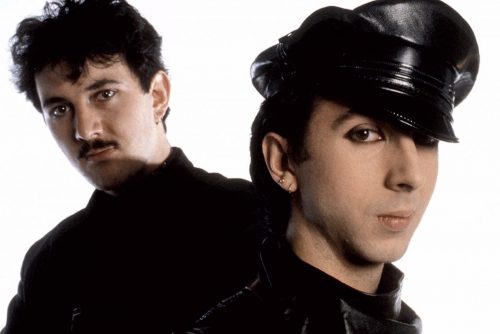 What most of the perplexed American radio audience didn’t then know was that the song was a cover, having first been recorded in 1964 by a then-little-known American artist, Gloria Jones, who would go on to re-record it in 1976, in effect covering herself. And while neither of her versions would make any impact on the charts, the story of this agonized song would enfold a long, strange string of figures from the bowels of rock history.

“Tainted Love” was written by Ed Cobb, a shadowy figure in American rock and pop in the ‘50s and ‘60s. Originally a member of squeaky-clean vocal group The Four Preps, he was already gravitating towards production by the time he quit the group in 1966.

Cobb might merely have joined the ranks of countless other songwriters and producers plying the lucrative byways of ‘60s pop, but here his career took a distinct left turn. Rather than capitalizing on the family-friendly harmonies the Preps had helped pioneer, he sought out darker, harder-edged bands like the Standells—who took his song “Dirty Water” to number 11 on the Billboard singles chart—and the Chocolate Watchband, whose blend of garage and psychedelic styles inspired countless fuzzed-out imitators.

Cobb also dabbled in R & B and soul. In addition to “Tainted Love,” he wrote Brenda Holloway’s 1964 hit “Every Little Bit Hurts.” That song would go on to be one of the most-covered of the genre, subsequent versions being recorded by the Small Faces, Jimi Hendrix, George Clinton, the Spencer Davis Group, the Clash, the Jam, and Alicia Keys.

Gloria Jones, meanwhile, had no such luck with her original recording of “Tainted Love.” It’s a shame, too; that first version is a classic soul stomper, ripping through a thumbnail sketch of sadomasochistic love in 2 minutes 19 seconds. Jones recorded an album and a few more singles before pursuing an advanced degree in piano, with a focus on the works of J.S. Bach.

But the music industry wasn’t quite done with Jones. Her work as a backing singer and songwriter led her to English glam superstar Marc Bolan of T. Rex, with whom she began a romantic relationship in the early 1970s. Tragically, it was Jones who was behind the wheel of Bolan’s BMC Mini when it left the road and hit a tree in the early hours of September 16, 1977, killing Bolan instantly.

But Bolan’s influence on Jones would live on in the form of a second version of “Tainted Love,” which he had produced the previous year. English club DJ Richard Searling had brought a copy of the original single back to England in 1973, where it had quickly become a favorite in the booming underground Northern Soul scene. Sadly for Jones, her second version had even less of an impact than had the first, possibly owing to Bolan’s slick ‘70s production rounding off some of the original’s appealing rough edges.

But the world wasn’t quite done with “Tainted Love.” Having found the song through the Northern Soul scene, the Soft Cell duo radically reworked it, stripping away the percussive and horn-spiked gloss to reveal the desperation at its core. Producer Mike Thorne—who had already produced Wire’s essential first three albums, among many others—is succinct in his assessment:

“You could smell the coke on that second, Northern Soul version, it was really so over-amped and so frantic. It was good for the dance floor, but I didn’t like the record…when Soft Cell performed the song I heard a very novel sound and a very nice voice, so off we went.”

Although “Tainted Love” would represent Soft Cell’s commercial high-water mark, the song, as they say, persists. Its moody and stark electronic sound—devoid of nearly any acoustic instruments save Almond’s voice and the band’s snaps and handclaps—influenced a generation of would-be synth-balladeers.

Some 35+ years after it was recorded, Soft Cell’s version remains in semi-regular rotation on rock and pop radio. If it once sounded out of place amid the bloated rock productions of the early ‘80s, its longevity is a testament not only to its directness and forward-thinking production, but to Gloria Jones’ impassioned delivery, and songwriter Ed Cobb’s knack for bringing dark, troubling material to the previously safe pastures of pop radio.

Hear our five favorite other covers of “Tainted Love” here.