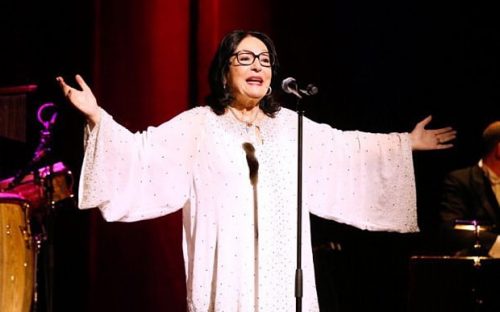 Nana Mouskouri is one of the best-selling female vocalists of all time. Even though she never became a household name in the U.S., estimates put her total album sales well above 200 million (some say as high as 300 million). By one count, she has recorded 1,550 songs in ten different languages.

With such impressive numbers, people ought to be lining up to record tributes to her. Instead, the 83-year-old decided to release a tribute album of her own, paying homage to actors, bands, and singers whose work has inspired her over the years. The album, Forever Young, includes covers of songs by Bob Dylan (obviously), the Beatles, Elvis, Bryan Adams, and Leonard Cohen, to name a few. But perhaps the most unusual choice is her cover of Amy Winehouse’s “Love is a Losing Game.”

Born in Crete in 1934, Mouskouri first began recording in the late ‘50s, about 25 years before Winehouse was even born. Mouskouri even popularized the dark-hair and thick, black plastic-rimmed-glasses look more than three decades before Lisa Loeb made it appear chic on MTV (google some old album covers, you’ll see what I mean). Though the bulk of Mouskouri’s sales have been in Europe, in the ’60s she made several attempts to break into the U.S. market. She recorded a jazz album with Quincy Jones in 1962, then made a live record with Harry Belafonte in 1966. But neither record approached the level of popularity she found across the pond.

Winehouse’s “Love Is A Losing Game,” like a lot of her music, sounds like it could have been released as a soul single on Stax Records circa 1968. Mouskouri, singing in English, makes it sound like a standard written in the ‘40s. Her rendition begins with her singing slowly to a lone piano accompaniment. As the song progresses, she is joined by a lush arrangement of drums, bass, strings and even a mid-song sax solo. She turns the song into a emotional tearjerker thats sounds like it has been part of her setlist for decades. Given the pace Mouskouri’s career is going at this point — she’s currently on a massive world tour to promote the new album — she just may have the opportunity to sing it for years to come.