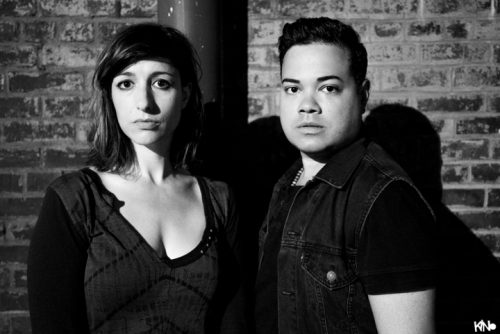 We’ve heard a lot of “Jolene” covers over the years. It’s a country staple, of course, and it’s also earned its fair share of great genre-crossing versions, from the White Stripes’ roaring classic to 48 Cameras’ Lynch-ian spook song. But we’ve never heard a cover quite like this.

Death By Piano are a new Brooklyn duo who describe themselves as “electro-pop-noir,” which is a pretty good genre tag for this cover. Bathed in echoing synths, haunting percussion, and far-off background vocals, it reinvents a song you might have thought past reinvention. And the reason it doesn’t much sound like a “Jolene” cover is that, as it turns out, it wasn’t supposed to be.

“We didn’t start ‘Jolene’ with the intention of covering it,” singer Kalen Lister says. “[Producer] Greywolf had simply sent me a new track. I tried [singing] 3 different ideas, one of which was ‘Jolene.’ Like so many, I had always loved that song, had played it solo, played it with my last band. For some reason it just came to me, even though this ambient track was in a different key and missing most of the harmonic changes. It’s interesting how different the song is from the original. Only tidbits of the melody are even intact and yet, it works, and gives new life to Dolly Parton’s poignant, simple, and honest story.”