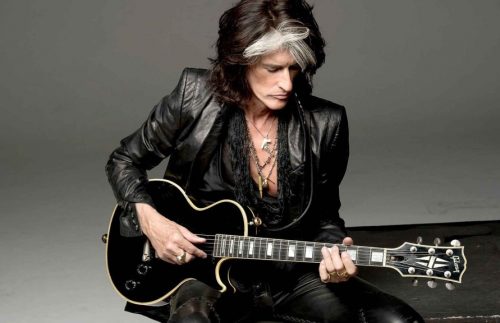 For the most part, Joe’s been consistent with a similar formula both as leader of The Joe Perry Project (during two separate stints) and as a solo artist. But as we’ll see, up to and including his latest album, Sweetzerland Manifesto – released last week – one could argue that his personal choices have been a bit more adventurous…

The Joe Perry Project’s second album, 1981’s I’ve Got the Rock ‘n’ Rolls Again, included two tracks written by guitarist and singer Charlie Farren. Prior to teaming up with Perry, Farren had local radio hits in Boston with the raucous “East Coast, West Coast” and the slower churning “Listen to the Rock” while a member of his previous band, Balloon. In a 2008 interview, Farren says Perry was aiming for a punk rock sound on the album but the results here are more Loverboy or Eddie Money. As a solo act, Perry continues to feature the song. Earlier this month, his set list showed that he opened with it for a special performance at the massive Consumer Electronics Show (CES) in Las Vegas.

The third and final studio release from the ‘80s versions of JPP featured another new lineup on 1983’s forgettable Once a Rocker, Always a Rocker. Lead singer Cowboy Mach Bell growls, writhes, and whispers over Perry’s signature guitar work. Let’s call it a unique glam-meets-rock moment. T. Rex’s Marc Bolan might approve but Aerosmith fans hearing this could only hope for Perry and Steven Tyler to settle their differences and reunite – which they did not long after the album’s release.

For the first cover on his self-titled 2005 solo debut, Perry chose a Doors’ ballad. Hardly a rocker, the original, a love song Jim Morrison penned after a break-up, was the B-side to the #1 hit “Light My Fire.” The track features a surprisingly good vocal interpretation by Perry. The strong dream-like arrangement has little emphasis on the guitar accompaniment outside of a short solo. All in all, a well-done effort on an album that also included a version of Woody Guthrie’s oft-covered “Vigilante Man.”

Jeremy Spencer, guitarist and a founding member of Fleetwood Mac, wrote the original. It first appeared in 1969 as the B-side to the single “Man of the World” but was attributed to Earl Vince and The Valiants – actually Fleetwood Mac performing under a different name. On Perry’s fifth solo effort (and the second under just his name) 2009’s Have Guitar, Will Travel, Perry included this often covered track made most famous in ’78 by punk rockers The Rezillos. Perry’s arrangement reverts back to its rockabilly roots and incorporates a Cramps-inspired feel stretched out to a 4-minute jam.

The Japanese pressing of Have Guitar, Will Travel included two bonus tracks, which were both covers. On The Beatles’ “Revolution,” Perry doubles up on the iconic introductory riff before vocalist Hagen Grohe pays his respects to John Lennon. The guitar break is vintage Perry. The track rocks while keeping its funky beat and keyboards. The second Japanese bonus track was a reggae sorta-cover of Aerosmith’s “Dream On.”

The holidays may be over but this classic, written by Johnny Marks and Marvin Brodie – first made famous by Chuck Berry in 1958 – was a standout in 2014 on Joe Perry’s Merry Christmas EP. The four-song release also included two instrumentals, “White Christmas,” and the traditional “Silent Night;” along with Elvis’ “Santa Claus is Back in Town.” As if that weren’t enough holiday cheer, Joe also contributed “Blue Christmas” as a blues instrumental on 1997’s Merry Axemas: A Guitar Christmas compilation.

Barry McGuire recorded and sang on the definitive version of P.F. Sloan’s famous protest song back in 1965. Sloan, a top tier LA session player, was the guitarist on the original, which reached #1 on the Billboard and Cash Box charts. It’s been covered dozens of times since (including on our birthday album), charting for The Turtles in 1970 and again in 1984 for Red Rockers. Perry’s “swamp botton” R&B version on Sweetzerland Manifesto – released this week on his first solo LP in over eight years  – features Joe on vocals and Johnny Depp on drums. The Perry-produced arrangement sports a blues-driven thumping intro riff reminiscent of The Beatles “Come Together” with generous helpings of slide guitar filling in for McGuire’s harmonica throughout the song. Like many versions of the track in the recent past, Perry removes the fourth verse which references “Red China” and “Selma, Alabama” in the original, but doesn’t shorten the song – in fact, the slower pace and additional guitar work actually extends it. The current band line-up (with Depp on guitar) played the track live last week at the Roxy in LA.

Check out other Aerosmith covers here.