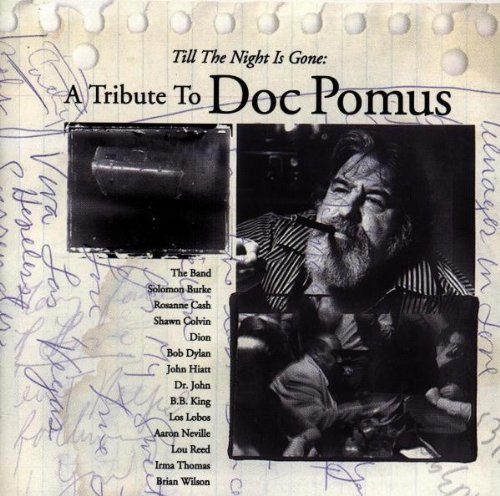 Well, that’s where you are wrong. Doc Pomus wrote many of the 1950s songs we now see as standards – standards across many genres, encompassing blues through rock (and roll), with a hefty side influence into country and soul. Few people won’t have at least a whistling memory of at least one of these songs, probably more, in versions played by artists as diverse as ZZ Top, Engelbert Humperdinck and the Searchers.

Doc Pomus, born Jerome Felder, was a Jewish boy, crippled by polio, necessitating crutches and, eventually, a wheelchair. This hardship, he later said, gave him a better understanding of the African-American musicians he gravitated towards, his first ambition being to be a blues singer, with the name Doc Pomus carrying a greater whiff of gravitas than his given name. Writing songs earned him a bigger buck than performing, launched by his hearing the Coasters cut a version of his song “Young Blood, itself then later and extensively reworked by Jerry Lieber and Mike Stoller (albeit keeping Doc his credit). He worked largely alongside Mort Shuman, a more established writer, with Pomus nominally the lyricist and Shuman handling the melody (in reality they both contributed to each). Elvis Presley made several of their songs into hits, such as ““Suspicion”” and “(Marie’s the Name of) His Latest Flame”. Later, Pomus worked with Phil Spector. Then, as the days of the Brill building decayed, he worked alone, writing for more diverse characters, themselves similarly misfits in need of classification, such as Dr John and Willy DeVille. Pomus was inducted into the Rock and Roll Hall of Fame in 1992, the Songwriters Hall of Fame in 1992, and the Blues Hall of Fame in 2012, all posthumously.

I came late to this album. Indeed, I only discovered it this last year, struck both by the diversity of the artists represented and by how their number diminishes year on year. It seemed thus somehow urgent to direct belated attention. Having in recent years lost Lou Reed, B.B. King, Solomon Burke, Levon Helm and Rick Danko – all of whom perform here – many of the other performers on the roster are approaching a time when they might be considered next. And what a roster it is.

Sure, some of the players have a long track record of tributes: Los Lobos and Shawn Colvin both near regulars in such recordings, but John Hiatt and Dion are lesser seen in this oeuvre, and Bob Dylan, sure he has done a few – notably the 1988 Woody Guthrie/Leadbelly tribute Folkways: A Vision Shared – but he does it rarely. And as for B.B. King, I only recall him on the Fats Domino 2007 tribute, Goin’ Home.

The most galvanizing aspect of the project is the obvious love with which the artists imbue the songs, backed usually by their own tried and tested teams, rather than roped in as guest vocalists behind some random band of recruited sidemen. The styles cross all boundaries, from faithful re-interpretations, to nicely quirky revisions like Shawn Colvin’s “Viva Las Vegas.” Dylan gives his best Bette Midler to “Boogie Woogie Country Girl,” playing it as a delightful romp over a shuffling, um, boogie. Lou Reed does what he does in the way only he can or could; if you liked his bonkers Sam Moore duet on Soul Man”, this is similar territory. (Bear in mind that Reed, like Pomus, started his career as a songwriter for hire.)

Aaron Neville sings the finale, “Save the Last Dance for Me,” perhaps the best known of the songs, a number often oversyruped in kitsch. Yet here Neville hauls that back, magnifying the pathos with his bittersweet and soaring counter-tenor. The only false note comes from Brian Wilson – a sober reminder whilst he still plods the stages, his voice was shot as long ago as 1995. With “Sweets for My Sweet,” the poppiest number on show, Wilson strains and strangles the lyric just a step or two beyond any limit of poignancy.

That besides, this is a delightful album that well bears digging in a few crates for. I recommend it heartily.

‘Till the Night is Gone: A Tribute to Doc Pomus’ Track List
1. “Lonely Avenue” by Los Lobos (Ray Charles cover)
2. “Boogie Woogie Country Girl” by Bob Dylan (Big Joe Turner cover)
3. “Viva Las Vegas” by Shawn Colvin (Elvis Presley cover)
4. “A Mess Of Blues” by John Hiatt (Elvis Presley cover)
5. “This Magic Moment” by Lou Reed (Jay & the Americans cover)
6. “Blinded By Love” by B.B. King (Johnny Adams cover)
7. “Young Blood” by The Band (the Coasters cover)
8. “There Must Be A Better World Somewhere” by Irma Thomas (B.B. King cover)
9. “Turn Me Loose” by Rosanne Cash (Fabian cover)
10. “I Count The Tears” by Dion (the Drifters cover)
11. “I’m On A Roll” by Dr. John (previously uncovered)
12. “Still In Love” by Solomon Burke (Johnny Adams cover)
13. “Sweets For My Sweet” by Brian Wilson (the Drifters cover)
14. “Save The Last Dance For Me” by Aaron Neville (the Drifters cover)

‘Till the Night is Gone’ isn’t streaming, but you can buy it at Amazon.

2 Responses to “Cover Classics: Till the Night is Gone – A Tribute to Doc Pomus”