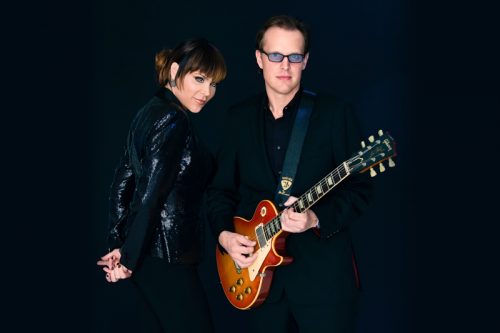 “I’m feeling mighty lonesome, haven’t slept a wink, I walk the floor and watch the door and in between I drink, black coffee.”

If this opening line from the original Sarah Vaughan version of “Black Coffee” released in 1949, is the first ear-worm that pops into your brain when you think of this song, don’t worry, you would be among the majority. And, it is down this rabbit hole you would be sent searching for cover versions from the most sultry of sirens including Julie London, Peggy Lee, and Rosemary Clooney. Fine versions all.

But, that was then and this is now. Joe Bonamassa and Beth Hart will soon be releasing their version on another superb platter of carefully curated cover tunes of the same name. Hailing from the Ike and Tina Turner and Humble Pie family tree, this version of the song – as Johnny Cash would say – “kicks like a mule and bites like a crocodile.” This is certainly not your grandmother’s cup of black coffee. Straight no chaser, please.

The pairing of Beth Hart’s back-of-the-bar pipes along with Joe Bonamassa’s impeccable guitar chops is a match born in Blues Rock heaven. The guttural opening lines of the song sound like a demon living deep in the singer’s gut that is struggling to escape from her throat. The song chugs along mightily and the demon is pushed forward with assistance from Tina Turner style growls, ten feet from stardom backing vocals, and slinky organ riffs. Everything is delivered with a deliciously retro 1970s hard rock flare that would make Steve Marriott proud.

For extra credit, make sure to check out their album, Don’t Explain, a fully formed set of cover songs from Beth and Joe that races from the best version of Tom Wait’s “Chocolate Jesus” that you will ever have the pleasure of experiencing to a second to arguably only one, Etta James, rendition of “I’d Rather Go Blind.