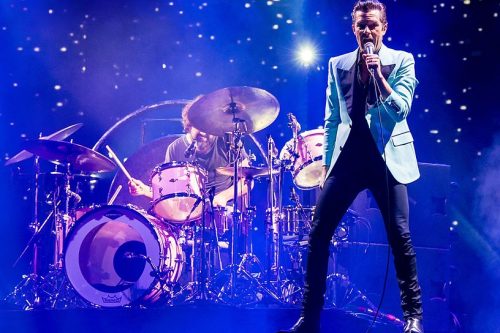 During a recent performance at the New Orleans Voodoo Music + Arts Experience festival, Flowers described a musical induction ritual widely shared by members of his generation. As he introduced a tribute to the Crescent City’s recently departed rock ‘n’ roll founding father Fats Domino, Flowers described how he, and perhaps every other Xennial, first heard Domino’s music while driving in the car with his father. “The station was always set to the oldies,” he told the crowd. “And when Fats Domino came on, we always turned it up.”

Based on appearance alone, Flowers seemed to have absorbed more than just the music from the Eisenhower Era. Wearing a light-blue sport coat with dark lapels and his hair slicked up, he looked a lot like Elvis. This somehow makes sense, given that the King cited Domino as an influence and even covered “Blueberry Hill.”

For their tribute to the Fat Man, The Killers plowed through a solid rendition of Domino’s 1955 smash hit “Ain’t That a Shame,” not veering too far from the original. No slick reinventions here. The real stars of the track were the Dirty Dozen Brass Band, a New Orleans-based horn group, which backed The Killers for the song. The short and sweet sax solo best embodied the spirit of Domino’s music. Whether performed by a Xennial, Millennial, oldies act or tribute band, it’s tough to top the perfection that was Fats Domino.

Click on these links for more on The Killers and the Dirty Dozen Brass Band.